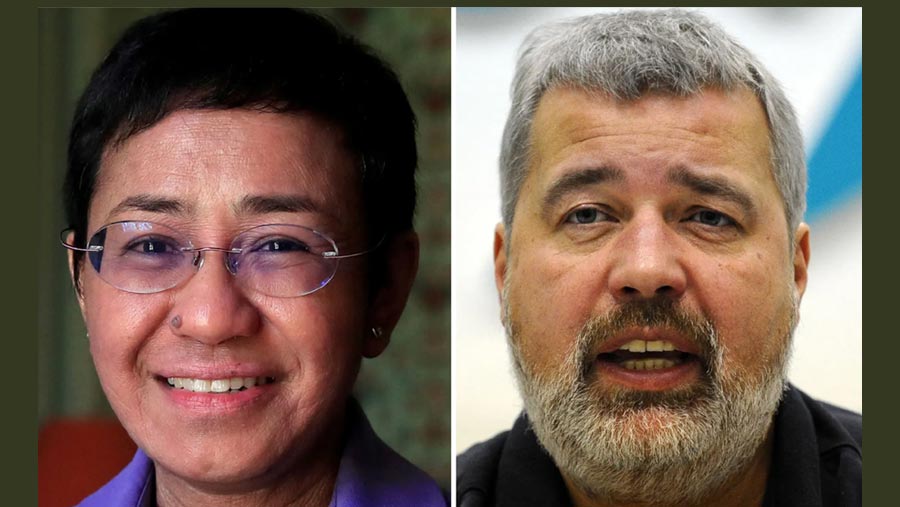 Journalists Maria Ressa and Dmitry Muratov, who braved the wrath of the leaders of the Philippines and Russia to expose corruption and misrule, won the Nobel Peace Prize on Friday (Oct 8), in an endorsement of free speech under fire worldwide.

The two were awarded "for their courageous fight for freedom of expression" in their countries, Chairwoman Berit Reiss-Andersen of the Norwegian Nobel Committee told a news conference.

"At the same time, they are representatives of all journalists who stand up for this ideal in a world in which democracy and freedom of the press face increasingly adverse conditions," she added. "Free, independent and fact-based journalism serves to protect against abuse of power, lies and war propaganda."

Muratov dedicated his award to six contributors to his Novaya Gazeta newspaper who had been murdered for their work exposing human rights violations and corruption.

"It's never been as hard to be journalist as it is today," said Ressa, a 35-year veteran journalist, who said she was tested by years of legal cases in the Philippines brought by the authorities over the work of her Rappler investigative website.

The prize is the first Nobel Peace Prize for journalists since the German Carl von Ossietzky won it in 1935 for revealing his country's secret post-war rearmament programme.

Muratov, 59, is the first Russian to win the peace prize since Soviet leader Mikhail Gorbachev in 1990. Gorbachev himself has long been associated with Muratov's newspaper, having contributed some of his Nobel prize money to help set it up in the early post-Soviet days when Russians expected new freedoms.

Ressa, 58, is the first individual winner of a Nobel prize in any field from the Philippines. Rappler, which she co-founded in 2012, has grown prominent through investigative reporting, including into large scale killings during a police campaign against drugs.

In August, a Philippine court dismissed a libel case against Ressa, one of several lawsuits filed against the journalist who says she has been targeted because of her news site's critical reports on President Rodrigo Duterte.

She was one of several journalists named Time Magazine Person of the Year in 2018 for fighting media intimidation, and her legal battles have raised international concern about the harassment of media in the Philippines, a country once seen as a standard bearer for press freedom in Asia.

The Nobel Peace Prize will be presented on Dec 10, the anniversary of the death of Swedish industrialist Alfred Nobel, who founded the awards in his 1895 will.