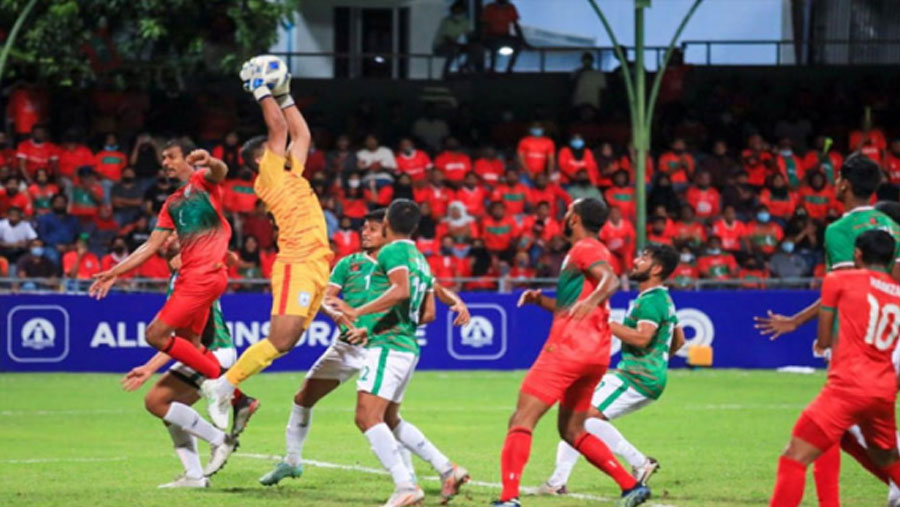 Bangladesh tasted their first defeat as they went down a 2-0 goal defeat to host Maldives in their third match of SAFF Championship held on Thursday night at National Football Stadium in Male, the capital of Maldives.

Maldives registered their first win of the SAFF Championship 2021 as they defeated Bangladesh by a 2-0 at the National Stadium in Male on Thursday (Oct 7). The hosts are now placed third in the standings with three points in two games while Bangladesh have four points from three fixtures.

Bangladesh started the game on a positive note and dictated the terms of the game in the initial exchanges. However, the hosts soon took complete control over the game.

The first real chance of the game came in the 28th minute when Ali Ashfaq played the ball to Hussain Nihan in front of goal. He just had to find the target from point blank range but scuffed it wide as Saad Uddin was in front of him.

Ali Ashfaq set up Ali Fasir for a finish inside the Bangladesh box but the latter blasted it wide in the 43rd minute. Ashfaq had a go at goal himself on the cusp of half-time but was denied by Anisur Rahman at the Bangladesh goal.

The Maldives continued to dominate the proceedings in the second-half. Hamza Mohammed broke the deadlock in spectacular fashion in the 55th minute. He dispatched a header from Hussain Nihan into the back of the Bangladesh goal with an overhead kick in the SAFF Championship clash.

The hosts doubled the lead when Maldives hit Bangladesh on the counter. Hassan Niaz made a darting solo run against the run of play and was brought down by Sohel Rana inside the box. The hosts were awarded a penalty in the 73rd minute.

Ashfaq stepped up and slotted the penalty into the bottom left corner to make it 2-0 in the 74th minute. Maldives continued their attacking onslaught with more attempts on goal for the rest of the game.