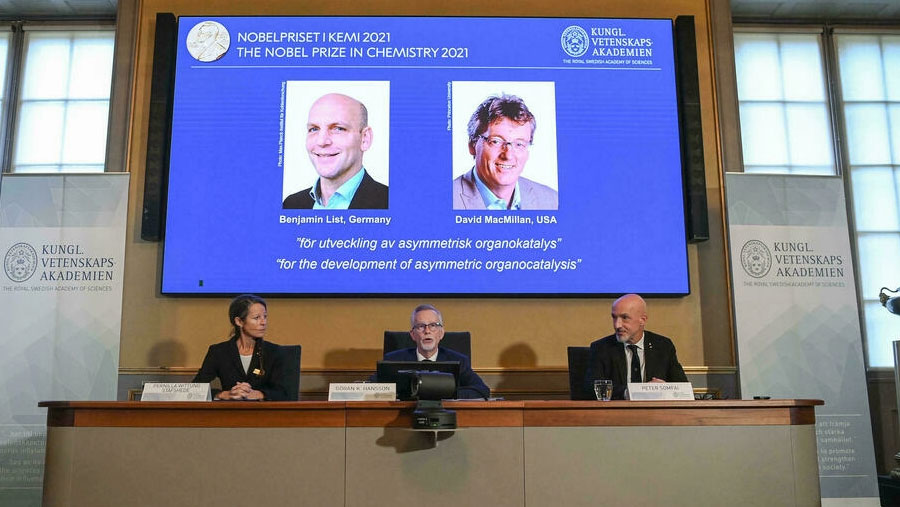 Two scientists have won the 2021 Nobel prize in chemistry for the discovery of a new type of catalyst that has revolutionised the development of drugs. The winners, David MacMillan form the USA, and Benjamin List from Germany, will share the award, presented by the Royal Swedish Academy of Sciences and worth 10m Swedish kronor.

The two scientists independently revealed that organic molecules can be used as catalysts, a fundamental tool in chemistry used to speed up reactions. Before the breakthrough there were just two classes of catalyst available: metals and enzymes.

Since MacMillan and Lists’ discovery of asymmetric organocatalysis, in 2000, the process has been widely applied including in the development of pharmaceuticals and the construction of solar panels. Organic catalysts are also environmentally friendly and cheap to produce.

Speaking to a press conference on Wednesday (Oct 6) from Amsterdam, where he is on holiday with his family, List said that he was “deeply honoured” by the award – although he had initially thought someone was playing a joke on him when he saw the Swedish code light up on his phone screen on Wednesday morning.

“When I first did this experiment I didn’t know what would happen, whether it was a stupid idea or if someone else had done it already,” he said. “When it worked I did think: ‘This could be something big.’ Of course, I didn’t expect this.”

Göran Hansson, secretary general of the Royal Swedish Academy of Sciences, said he had not yet managed to speak to MacMillan, who is based at Princeton University, and had sent an email and left a voicemail.

Prof Tom Welton, president of the Royal Society of Chemistry, said the discovery had made a huge impact: “The field has huge potential to develop yet more new and exciting chemical synthesis routes in the future, enabling better medicines, high tech materials and so many other applications which can make all our lives better. I am really pleased to see this very well deserved award.”

The Nobel season continues on Thursday with the much-anticipated prize for literature and with peace on Friday before the economics prize winds things up on Monday, Oct 11.