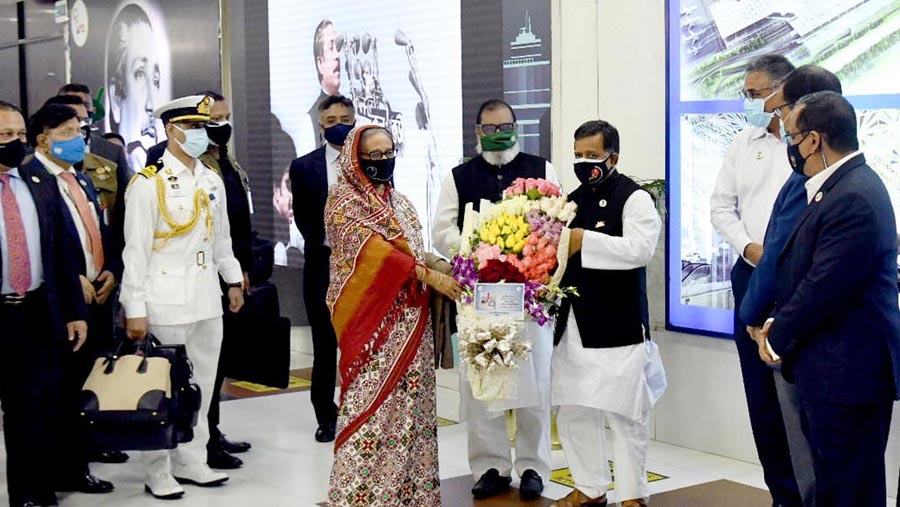 After a brief stopover in Helsinki, the flight departed the Helsinki-Vantaa International Airport at 10:55 a.m. (local time) for Dhaka.

Ambassador of Bangladesh in Finland (non-resident) Md Nazmul Islam saw the prime minister off at the airport.

The flight arrived in the Helsinki-Vantaa International Airport at 9 a.m. on Oct 1 (local time) where Ambassador of Bangladesh in Finland (non-resident) Md Nazmul Islam received the premier.

Earlier, the flight departed the Dallas International Airport in Washington DC for Helsinki at 17:27 p.m. on Thursday (Washington DC time).

Bangladesh Ambassador to the USA M Shahidul Islam saw the premier off at the airport.

The PM reached New York to attend the 76th UNGA on Sep 19 after a two-day stopover in Helsinki.

During her stay at New York from Sep 19 to 24, she attended the UNGA at the UN Headquarters and some high voltage side events.

The premier later left New York for Washington DC on Sep 25 after wrapping up her week-long official visit to New York.

During her stay in New York, Sheikh Hasina addressed the general debate of the 76th session of the United Nations General Assembly.

She delivered her speech in Bangla on Sep 24 following the footprint of Father of the Nation Bangabandhu Sheikh Mujibur Rahman.

From Sep 19 to 24, Sheikh Hasina attended several high-level and close-door meetings as well as bilateral talks with head of governments, states and organisations.

She planted a sapling and inaugurated a bench at the UN Gardens in North Lawn of the UN Headquarters in honour of Father of the Nation Bangabandhu Sheikh Mujibur Rahman on Sep 20 marking his birth centenary.