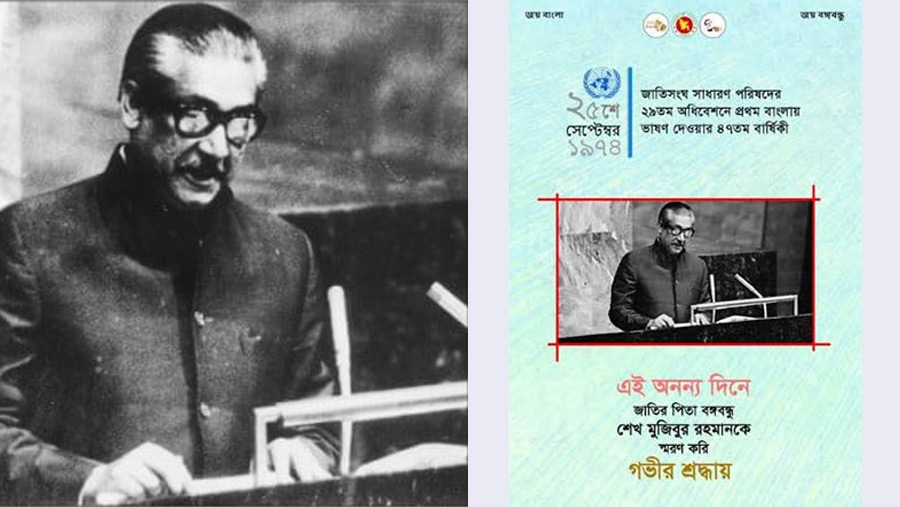 September 25 is a significant Day as the Father of the Nation Bangabandhu Sheikh Mujibur Rahman, for the first time in its history, gave a speech in Bangla at the 29th General Assembly of the United Nations on that day in 1974.

The speech is a historic one especially for two reasons. Firstly, it was delivered in Bengali and secondly, it ushered in fresh ideas and policies to build a brave new world free of economic inequalities, social injustice, military aggression and threats of the nuclear war.

In his remarkable speech Bangabandhu said, “Only those countries who have earned freedom after long years of struggles and sacrifices have strong will and strength of mind, Remember President, my Bengalis can endure sufferings but will not die. In the challenge to survive, the will of my people is my greatest strength.” (Sep 25, 1974).

In his speech, he said, “We will not move towards a world filled with hunger, poverty, unemployment, fear of starvation, fear of being completely destroyed by nuclear war, we will look to a world where humanity is capable of great success in the era of astounding advances in science and technology. This future will be free from the threat of nuclear war. By the equitable distribution of all the resources and technical knowledge of the world, the door to such welfare will be opened where every person will have the minimum guarantee of a happy and respectable life.”

Marking the historic day, an e-poster was published under the initiative of the Father of the Nation Bangabandhu Sheikh Mujibur Rahman's Birth Centenary Celebration National Implementation Committee.

The national implementation committee has requested all to spread the e-poster widely in electronic, online and social media on behalf of the committee to celebrate the birth centenary of Father of the Nation Bangabandhu Sheikh Mujibur Rahman, said a press release.

The state of New York in the USA will observe Bangladeshi Immigrant Day today for the third consecutive times.

In memory of his speech on Sep 25, the day was declared as the Bangladeshi Immigrant Day, said Bishwajeet Saha, founder and chief executive officer (CEO) of New York-based organization of Bangladeshi immigrants Muktadhara Foundation.

On Jan 21, New York State Senator Toby Ann Stavisky placed the bill in the State Senate while the bill was passed unanimously on Jan 26.

Saha said this achievement has added another feather to the activities of Muktadhara Foundation in observance of Bangabandhu's birth centenary.

Group of Muktadhara will arrange a colorful programme at Jewish Centre of Jackson Heights at 5 pm  today to observe the day.

Bangladesh Foreign Minister AK Abdul Momen will join the programme as the chief guest while Bangladeshi-born eminent economist Dr Nazrul Islam, who is serving as Chief of Development Research at the UN, will deliver the keynote paper at the function.