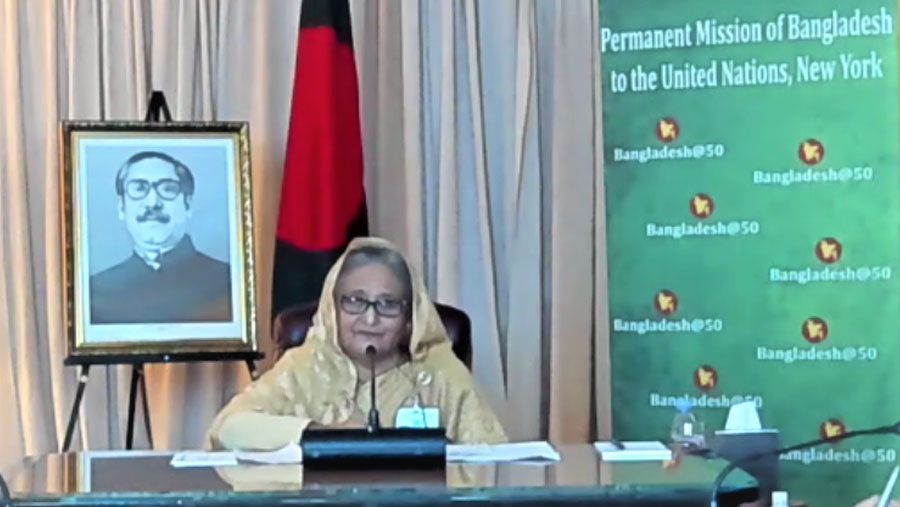 Prime Minister Sheikh Hasina has stressed the need for a global roadmap to ensure permanent recovery from the Covid-19 pandemic for achieving the Sustainable Development Goals (SDGSs) by 2030.

"We need to chart out a bold and ambitious global roadmap to put us back on the SDGs track, so that no one is left behind," she said while addressing virtually the 9th Annual International Conference on Sustainable Development on Monday, Sep 20 (New York time), local media reported.

Sheikh Hasina, in her speech, put forward a five-point proposal that is required to address properly the global Covid-19 pandemic to ensure achieving the SDGs.

In her first proposal, the Prime Minister said "The success of SDGs now depends on sustainable recovery from the pandemic. The call of the hour, and with real urgency, is to ensure vaccines for everyone, everywhere."

Sheikh Hasina, in her second proposal, said “We must close the huge resource gap in the implementation of the 2030 Agenda.”

Thirdly, she said, “We are concerned about the rising trend in global poverty, for the first time since 1998, due to the impacts of the pandemic.”

The PM, in her fourth, proposal said. "We believe that Covid-19 recovery measures should complement climate actions to create stronger resilience against any future shock or calamities."

Finally, there must be more focus on enhanced monitoring and support mechanism for SDGs implementation, she added.

The PM said that the UN (United Nations) should have enhanced coordination in this regard.

It is also imperative to ensure that there are adequate and timely support measures to withstand emergencies and shocks to avoid any slide back, she added.

The PM advocated for scaling up preparedness for pandemic and other emergencies should be handled with priority at every level.

Describing the 2030 Agenda as a global compact, she said, "This is our blueprint for a sustainable and inclusive global development. No single country can achieve this Agenda alone. We need enhanced global collaboration and solidarity to advance this agenda."

She said “Since we have already entered the Decade of Delivery and Action of the Agenda, yet the goals seem far away.”

"Even before the Covid-19 pandemic, many countries were off-track to achieve their SDGs. The pandemic has pushed them further behind," she opined.

The Covid-19 pandemic has upset the world, she said adding that it has taken countless lives and upset livelihoods. Millions of people worldwide have been reduced to poverty and hunger, she added.

She continued that education is facing huge disruption, especially of children.

Noting that the climate vulnerable countries like Bangladesh are adversely affected by the pandemic as well as natural disasters, she said, "Our development gains and SDGs progress have been badly hit."

Turning to her country's preparation to this end, she said that Bangladesh is the pioneer in climate change adaptation and mitigation efforts. “We have recently submitted an ambitious and updated NDC”, she added.

"We have adopted the ‘Mujib Climate Prosperity Plan’ focusing on green growth, resilient infrastructure and renewable energy," she informed.

Referring to the Sustainable Development Report 2021 published by the University of Cambridge, Sheikh Hasina said that Bangladesh has improved the most on the SDG Index since 2015.

The PM told the conference that Bangladesh is now among the five fastest growing economies in the world, and ranked 41st in terms of GDP.

She continued that the UN recommended Bangladesh to graduate from the LDC category this year.

The PM said “Since 2015, we have been working hard to integrate Agenda 2030 into our national plans and policies putting “whole of government” approach.”

A high-level national committee was formed for the implementation and monitoring of the SDGs, she also said.

To this end, she said, "We have already submitted two VNRs in 2017 and 2020. We have done sector specific assessments and integrated SDGs in our 8th Five Year Plan. Our Second Perspective Plan has also been aligned with the SDGs."

Mentioning that The Delta-Plan 2100 captures the SDGs vision and beyond, she said, "It aims to create a prosperous and climate resilient delta for our future generations."

The premier said that they have taken up a coordinated effort involving the government, the private sector, the civil society, and other stakeholders to ensure “whole of society engagement”.

To reach people who are the furthest behind, she said they have put additional focus on localizing SDGs.

She added: "We have launched SDGs tracker. This serves as a data storehouse to monitor real-time progress of our SDGs."

The premier said that they have invested heavily on infrastructure capacity.

"We are launching mega infrastructure projects like the Padma Bridge, Dhaka Metro rail, Karnaphuli Tunnel and the Rooppur Nuclear Power Plant," she added.

She told the conference that women have been mainstreamed in national development and economic activities and they are now the backbone of certain vital sectors, such as the RMG.

The premier said that Bangladesh's investment in digitization and connectivity has spurred the digital economy, youth led innovations and transformative socio-economic changes, "This is now also helping us tackle the COVID-19 pandemic better ", she added.

She went on saying, "We have a huge youth population. We have invested heavily in their education and skills development to help them reap the maximum benefit of the digital economy and technological innovations."

In the face of this turmoil, she thanked the organiser for the opportunity to share Bangladesh's experiences and the country's perspectives on how to “build forward better” and to get back on track to achieve the 2030 Agenda, and the Paris Climate Agreement.

Stating that as a policymaker her association with the global development discourse is for more than two decades, she said, "I led Bangladesh in the Millennium Development Summit in 2000, in the adoptions of the landmark 2030 Agenda, and the Paris Climate Agreement in 2015."

“Our achievements in MDGs were highly significant. We were recognized by the international community as a development miracle for our success, especially in poverty reduction, food security, gender parity in primary and secondary school, decreasing infant and maternal mortality rate, gender equality, etc", she said.

Over the past one decade, the country’s poverty rate came down from 31.5% to 20.5%, and the per capita income multiplied more than three-fold, she told the conference.

She said that they have set up more than 18 thousand community clinics and health centers to cater healthcare services mainly to women and children.

According to WEF, in political empowerment of women, Bangladesh is ranked 7th, ahead of its regional neighbors since 2014, she informed.

Greater emphasis has been laid on female education, and the girls’ education up to 12th grade has been made free in Bangladesh, she said.

She added: "Primary-school students are supported by stipends. Stipend money reaches the mothers or legitimate guardians directly through their mobile phones. About 23 million students have been brought under stipend and scholarships."

The PM said they have established 20 new public technological and general universities in the country raising the total number of public universities to 52.

Besides, as many as 105 private universities are offering higher education in the country, she continued.

"Enrolment in pre-primary and primary level rose to 99%. The increasing female education has significantly lowered the rate of child marriage”, she further said.

The premier added that free books are being distributed among students up to secondary level since 2010 while school lunches have also been arranged. As a result, dropouts have drastically decreased, she said adding “Our SDGs journey builds on these successes.”