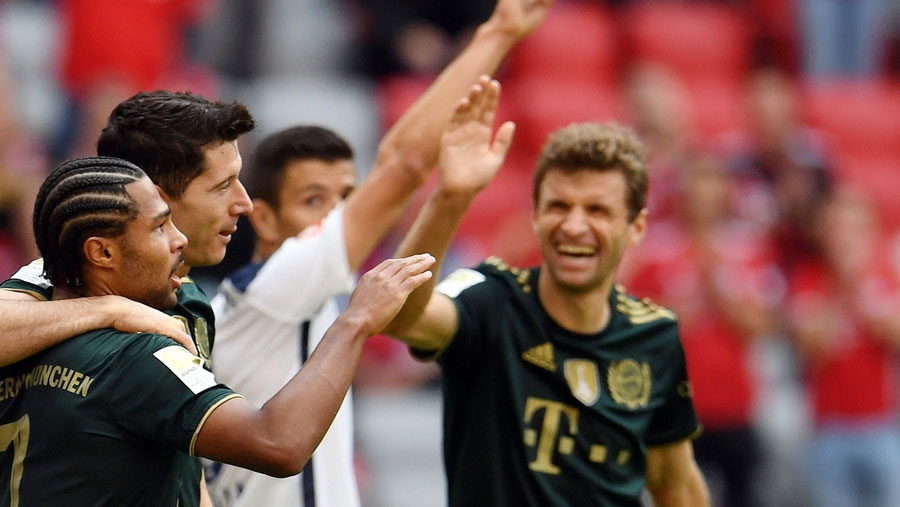 Bayern Munich topped the Bundesliga for the first time this season with a 7-0 thrashing of Bochum on Saturday (Sep 18) as Robert Lewandowski scored for a record 13th consecutive home league game. Joshua Kimmich netted twice while Lewandowski poached a second-half goal to claim another league record as Leroy Sane, Serge Gnabry and Eric Maxim Choupo-Moting all scored for Bayern. Greek defender Vasilios Lampropoulos scored a first-half own goal as Bochum ran out of luck at the Allianz Arena.

Bayern Munich cruised to an emphatic 7-0 victory over VfL Bochum to move to the top of the German Bundesliga.

Joshua Kimmich scored twice after Leroy Sane hit an excellent free-kick to begin the rout. Serge Gnabry, Robert Lewandowski and Eric Maxim Choupo-Moting also got on the scoresheet as Vasilis Lampropoulos put through his own net.

Bayern were playing in a dark green Oktoberfest kit, their fourth different shirt this season.

Victory was all-but assured at half-time when Bochum centre-back Lampropoulos converted into his own goal to hand the hosts a 4-0 lead at the Allianz Arena.

The thrashing takes Bayern's goal tally to 20 after their opening five games of the season, although Wolfsburg can move back to the top of the table if they beat Eintracht Frankfurt on Sunday.

Three days after their 6-3 mauling at Manchester City in the Champions League, RB Leipzig were made to work for a 1-1 draw at Cologne.

Anthony Modeste gave Cologne a second-half lead after he and team-mate Mark Uth both had efforts ruled offside.

The VAR also spotted an offside when Leipzig playmaker Emil Forsberg put the ball in the net before Malian midfielder Amadou Haidara headed the visitors level.