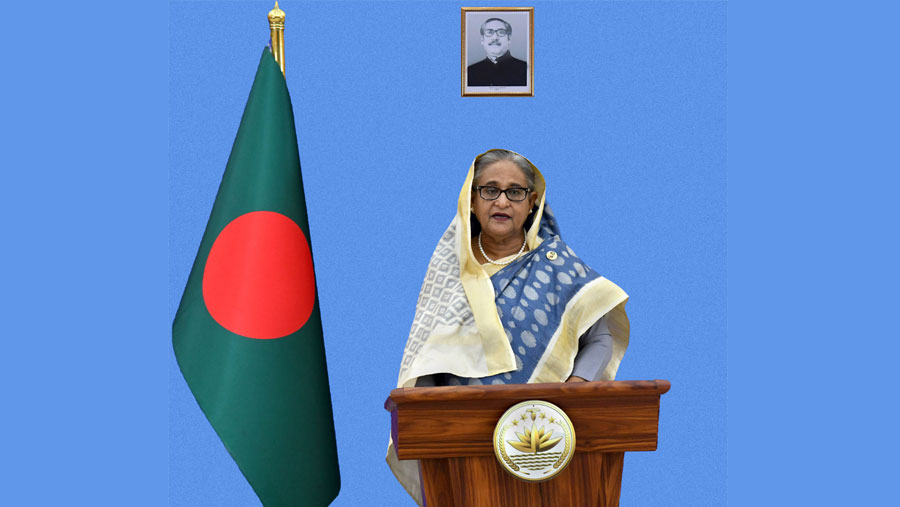 Prime Minister Sheikh Hasina on Friday (Sep 17) urged the major world economies to work with all the stakeholders in partnership to ensure a sustainable future for the next generation.

"Major economies have to work with all stakeholders globally in partnership for ensuring a sustainable future for the next generation," she said.

The PM, in a pre-recorded speech aired in a high level event titled “Major Economies Forum on Energy and Climate” Summit convened by US President Joe Biden in Washington DC, placed a six-point proposal for the forum's consideration, local media reported.

In her first proposal, she called upon the major carbon emitting countries to take actions to reduce their emissions to keep the global temperature rise at 1.5 degree Celsius.

In her second proposal, Sheikh Hasina said that the commitment of annual 100 billion dollars climate fund by the developed countries has to be fulfilled, distributed 50:50 between adaptation and mitigation.

In the third proposal, she renewed her call to the developed countries to come forward with the most effective energy solutions along with technology transfer to the developing countries.

In her fourth proposal, she said while transitioning to renewables, stocktaking of respective development priorities of nation-states, according to loss and damage experienced by them should be considered.

The premier, in her fifth proposal, said that the responsibility of rehabilitating people displaced because of sea-level rise, increase in salinity, river erosion, floods and draughts needs to be shared by all countries.

She has sought strong and significant outcome of COP26 to be held in November in Glasgow and urged the major economies of the world to play an important role there to this end.

The premier said that Bangladesh is one of the most climate vulnerable countries.

She said that Bangladesh has taken the world’s most extensive domestic solar energy programmes.

The PM further said that Bangladesh is going to implement the ‘Mujib Climate Prosperity Plan’ – a journey from climate vulnerability to climate resilience to climate prosperity.

As the Chair of the Climate Vulnerable Forum (CVF) and the V20, the Prime Minister said, Bangladesh’s key focus is to promote the interests of the climate vulnerable countries.

She added that Bangladesh also shares the best practices through the South Asia regional office of the Global Center on Adaptation in Dhaka.