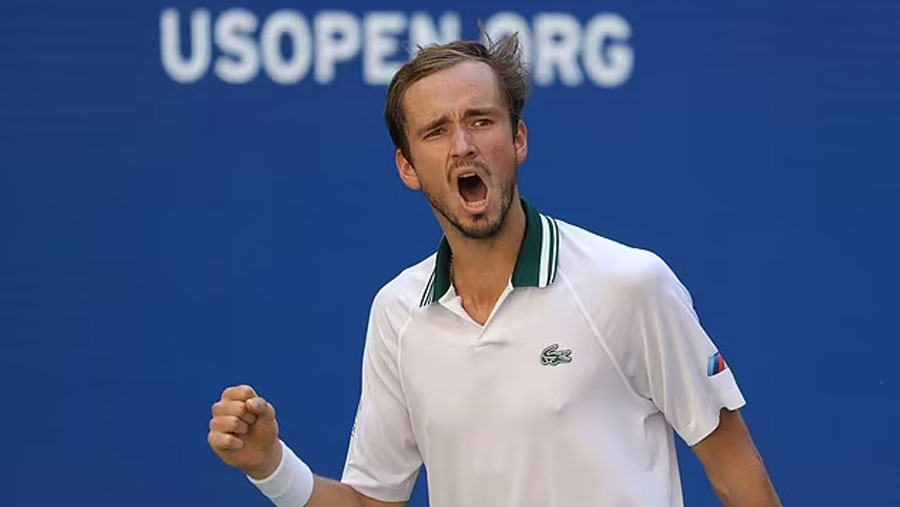 The Russian raced through to a two-set lead but Van de Zandschulp, despite looking exhausted, hit back.

Medvedev will face either Felix Auger-Aliassime or Carlos Alcaraz next.

Medvedev is seen as the most likely challenger to Novak Djokovic's hunt for a calendar Grand Slam.

He lost to Djokovic earlier this year in a lacklustre Australian Open final but reached the final in New York two years ago, where he was beaten by Rafael Nadal in five battling sets.

"In 2019 it was my first Grand Slam breakthrough. New York is already my heart," the 25-year-old said in his on court interview.

"So semi-finals again, I want to do a bit better than the last few times and do this last test which is the toughest."

He had not dropped a set en route to the last four and looked as though he would continue that streak as he took a two-set lead in under an hour.

Van de Zandschulp, who has spent 22 hours on court in his run from qualifying to the quarter-finals, was struggling to move fluently and received treatment on his thigh at the end of the second set.

However, he took advantage of a dip in Medvedev's focus, creating three break points in the world number two's opening service game before eventually breaking a for a 3-2 lead.

He held off Medvedev to serve out the set but the Russian upped his pace, racing through his service games to put the pressure back on the world number 117.

Van de Zandschulp saved the first match point with a wonderful serve and volley but was unable to stop Medvedev advancing.

He has, however, enjoyed a fantastic run in New York, having won two five-set matches and two four-setters and registering victories over eighth seed Casper Ruud and 11th seed Diego Schwartzman.

"It's an amazing run [for Van de Zandschulp]. I played, I think, two times in the qualifiers at a Grand Slam and never made it to the main draw," Medvedev added.