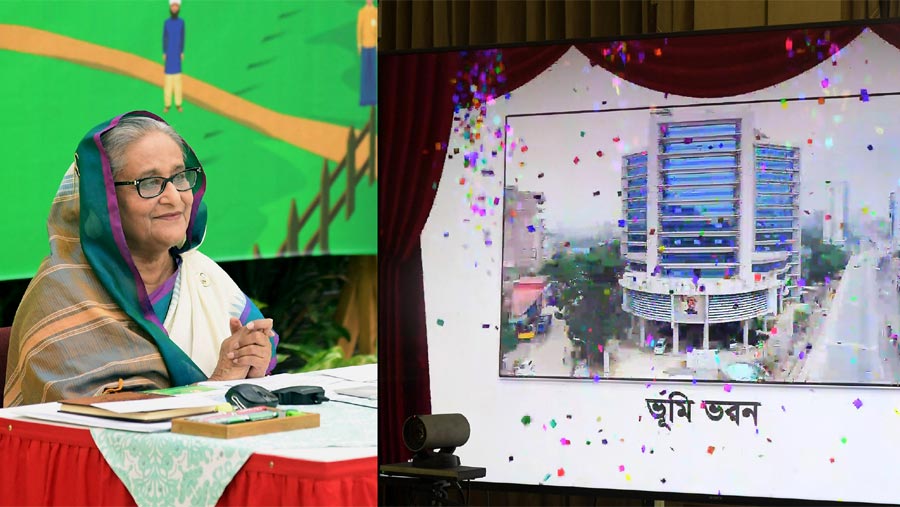 Prime Minister Sheikh Hasina on Wednesday (Sep 8) inaugurated "Bhumi Bhaban" in the capital's Tejgaon area to make it as "one-stop-service" hub for land related services. To facilitate a hassle-free service to the people, all the offices related to land now will be accommodated under the rooftop of this Bhaban. The Premier joined the inaugural ceremony virtually from her official residence Ganabhaban, local media reported.

Earlier on Sep 18, 2014, during her visit to the Ministry of Land, Prime Minister Sheikh Hasina directed all the concerned departments and agencies to come under one roof and take steps to provide one-stop-service to the people.

To comply with her directives, an initiative was taken to construct a land building complex to house all the offices and agencies under the Ministry of Land.

The Land Reform Board, Land Appeal Board and Land Records and Survey Department under the Ministry of Land were located at different places in Dhaka city.

Now, the newly constructed 13-storey building with two-basement having 32,200 square metre spaces will be the house of these offices to ease the process of land related services.

A day-care center has also been set up at the Bhumi Bhaban Complex for the convenience of working women. Also, the building is equipped with sewerage treatment plant system.

In addition, a Bangabandhu Corner and Mural of Father of the Nation Bangabandhu Sheikh Mujibur Rahman have been set up in the complex.

Officials said during her visit to the land ministry in 2014, the Prime Minister had also given 31 instructions so the people do not face any harassment or suffering to get the services of land, while at the same time the land services can be fully digitized.

Following the implementation of those 31-point directives, land related services have been eased and people now are getting many services from home.

The ministry hoped that the overall activities of land services will be fully digitized very soon.