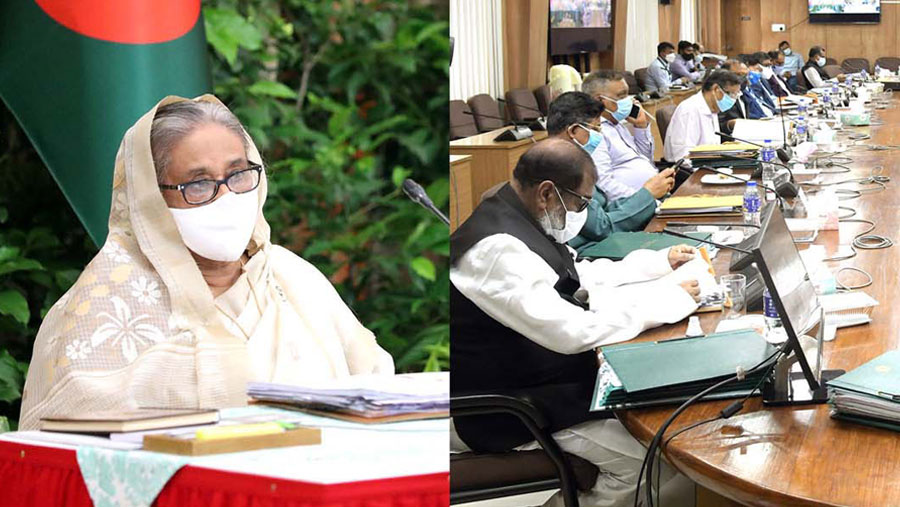 The government today approved three new upazilas named "Eidgaon" in Cox’s Bazar, "Modhyanagar" in Sunamganj and "Dashar" in Madaripur, raising the total number of the upazilas to 495 in the country.

The approval came from the meeting of the National Implementation Committee for Administrative Reform (NICAR), held virtually.

Prime Minister Sheikh Hasina chaired the meeting, joining from her official residence Ganabhaban, while her cabinet colleagues from the Secretariat.

“The structures of the three new upazilas would be like that of the latest Upazila (492nd Upazila),” said Cabinet Secretary Khandker Anwarul Islam while briefing reporters after the meetings of the Cabinet and NICAR.

Besides, Dakkhin Sunamganj upazila was renamed as "Shantiganj" Upazila, he said.

In the NICAR meeting, the Sylhet City Corporation area was extended and Shahjalal University of Science and Technology (SUST) and some big establishments came under the city area, he said.

Apart from this, changes were brought to the boundaries of two municipalities – "Dohar'’ in Dhaka and "Shibchar'’ in Madaripur, said the Cabinet Secretary.

Over the formation of three new upazilas, he said the Eidgaon is a very remote place, which is some 40-km away from Cox’s Bazar Sadar.

Modhyanagar ppazila was created by splitting Dharmapasha upazila as it is segregated place due to Haor, which is some 25-km away from Dharmapasha, he said adding that Dashar is also a very remote place in Kalkini upazila of Madaripur.

Meanwhile, the Cabinet gave the final approval to the draft of the Bangladesh Legal Practitioners and Bar Council (Amendment) Ordinance, 2021 with a provision of allowing the government to form an ad-hoc committee for a maximum one-year tenure to arrange the Bar Council election in an unusual situation.

“If the regular Bar Council election can’t be held by May 31 after every three years, the government can form a 15-member ad-hoc committee for a maximum one year,” Khandker Anwarul Islam said.

He said the Law Ministry placed the proposed law as the deadline for the Bar Council election expired on May 31 last amid the Covid-19 pandemic.

In the existing Bangladesh Legal Practitioners and Bar Council Order, 1972, there is no alternative provision, if the regular election can’t be arranged in time due to natural disasters or something else like acts of God, he said.

On the other hand, the meeting rejected a specific proposal for bringing amendments to the Government Services Act, 2018.

In the meeting, a report on the implementation rate of the cabinet decisions in the second quarter (April-June) was also presented.