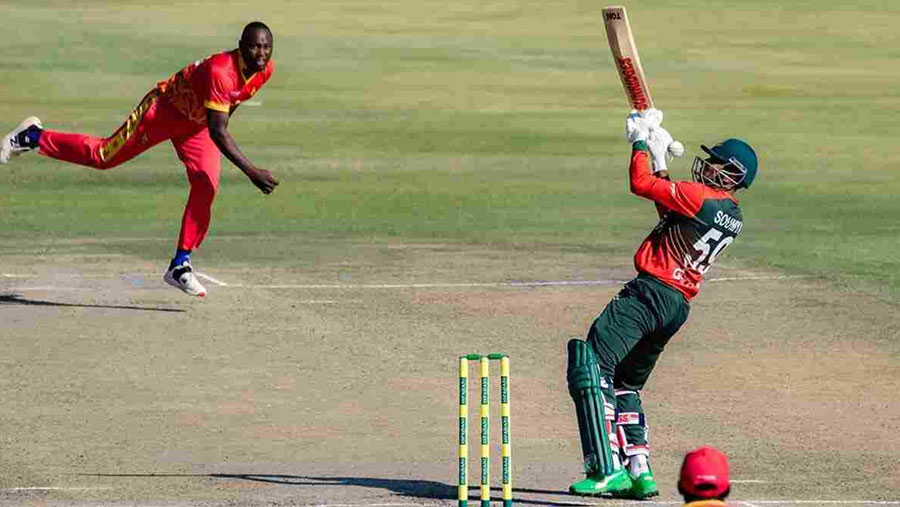 Soumya Sarkar came up with an all-round performance as Bangladesh chased down a mammoth 194-run target with incredibly ease to snatch a five-wicket victory and thereby won the three-match Twenty20 International series by 2-1 at Harare Sports Club on Sunday (Jul 25).

By winning the last match of the tour, the Tigers completed a hattrick of series win against Zimbabwe. The visitors won the one-off Test and whitewashed Zimbabwe in three-match ODI series before sealing 2-1 win in T20 series. The only defeat came in the second T20, which gave Zimbabwe a chance to win the series.

But the hosts’ aspiration was not fulfilled despite compiling a hefty 193-5 as Bangladesh gunned down the total with four balls to spare.

Soumya Sarkar led the charge with 2-19 in bowling before hammering a terrific 49-ball 68.

Bangladesh though lost opener Naim Sheikh (3) cheaply, Soumya stood tall against the adversities and kept the side in a position of dominance. Soumya Sarkar’s sublime 49-ball 68 included nine fours and one six. It was his second half-century in the series.

While Soumya played the match defining knock, he was ably supported by Shakib Al Hasan and skipper Mahmudullah Riyad, who batted aggressively to keep the asking run rate always under control.

Afif Hossain was the other notable scorer with 14 off just 5, clobbering two sixes.

Opener Wessley Madhevere gave Zimbabwe a flying start along with Tadiwanashe Marumani after captain Sikandar Raza decided to bat for the third time in a row in the series.

They shared 63 runs in just six overs before Marumani fell for 27. But Madhevere sent the ball across the rope for six times to hit 54 off 35.

While Soumya bagged 2-19, Shakib, Saifuddin and Shoriful took one wicket apiece for Bangladesh.