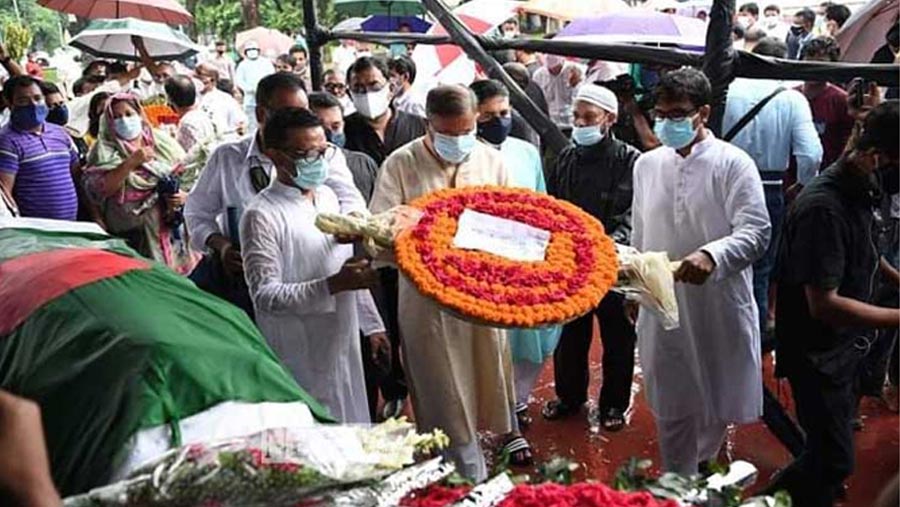 Bangladesh on Saturday (Jul 24) paid rich tributes to leading exponent of "Gano Sangeet" or songs of masses, and 1971 Freedom Fighter Fakir Alamgir as he was laid to eternal rest at the Taltola Graveyard in the capital.

Bugles played the last post as he was extended the ceremonial honour guard as part of the state honour at Pallima Sangsad complex near his home at Khilgaon, local media reported.

Politicians, civil society figures and fellow artistes joined hundreds others of different social strata at the Central Shaheed Minar to have their last glimpses of Alamgir ahead of his burial after two Namaj-e-Janazas.

Several of the distinguished people in their instant comments called Alamgir also as a folk song icon and described him as one of those who promoted and portrayed Bangladesh's inclusive, non-communal conscience through his songs.

Alamgir's first Janaza was held in the morning on the Pallima Sangsad premises while the second one was held at the Matir Mosjid mosque adjacent to the graveyard after Zohr prayers.

Alamgir breathed his last at 10:56 pm last night while was being treated at the private United Hospital's intensive care unit for Covid-19 at the age of 71.

The prominent singer suffered a cardiac arrest around 10pm while duty doctor declared him dead at 10:56 p.m.

Born in Faridpur, Fakir Alamgir made his debut as a singer in 1966 and emerged as a popular Gano Sangeet singer during the 1969 uprising in the then East Pakistan as a member of the “Kranti Shilpi Gosthi” and “Gana Shilpi Gosthi” and later joined the Swadhin Bangla Betar Kendra during the Liberation War.

In 1976 he founded the leading music group "Wrishiz Shilpi Gosthi" in 1976 and also served as the president of Gano Sangeet Shamanya Parishad (GSSP).

Alamgir made room in hearts of millions with his songs, reflecting emotions of people at grassroots and instilling into them liberal and inclusive spirit alongside patriotism.

He was conferred with the prestigious Ekushey Padak in 1999 for his significant contribution to music.