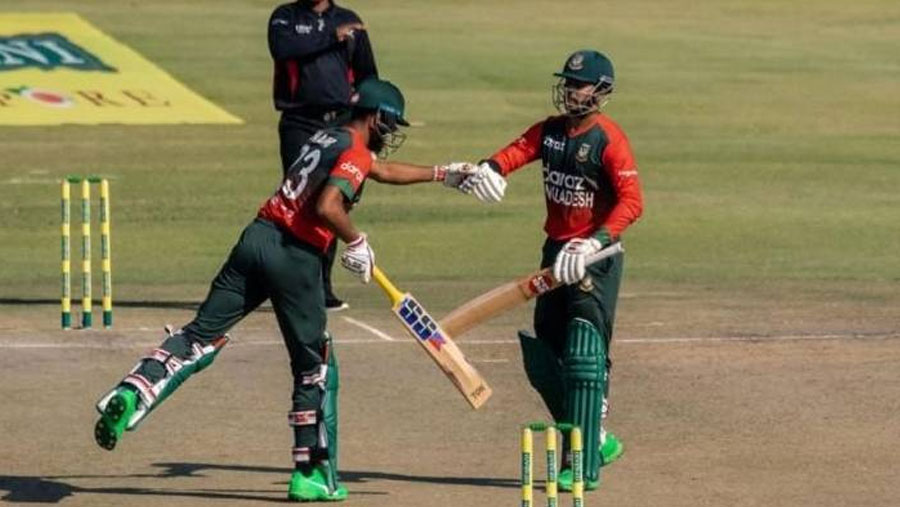 A 102-run opening stand between Mohammad Naim and Soumya Sarkar set up Bangladesh for an eight-wicket win over Zimbabwe in Harare on Thursday (Jul 22) in the first of three Twenty20 internationals. Zimbabwe won the toss, chose to bat and were bowled out for 152 in 19 overs. Bangladesh reached the target with seven balls to spare to register their 33rd win from exactly 100 T20Is.

Opener Mohammad Naim struck a brilliant 51-ball 63 not out as Bangladesh made a winning start to the three-match Twenty20 International series, whacking Zimbabwe past by eight wickets in the first match at Harare Sports Club on Thursday (Jul 22).

The victory was significant, considering that it was the Tigers' 100th match in this shortest format of cricket. Bangladesh also registered victory in their first T20 match, beating Zimbabwe by 43 runs.

Bangladesh, who remained unbeaten in the tour so far, winning one-off Test and three-match ODI series, dismissed Zimbabwe for 152 in 19 overs after which they cantered to the victory with seven balls to spare, making 153-2 in 18.5 overs.

Naim who struck six boundaries in his unbeaten 63 off 51, took the side on the verge of the victory, sharing 102 runs in 13.1 overs with Soumya Sarkar.

The partnership basically threw Zimbabwe out of the game. Soumya hit four fours and two sixes to blast 50 off 45.

Skipper Mahmudullah Riyad made 15 while Nurul Hasan Sohan, who played his first T20 game after four years, was not out on 16.

Earlier, Zimbabwe won the toss and elected to bat first but couldn't make a rapid start. Regis Chakabva however rallied the side to a challenging total.

Chakabva was the highest scorer for Zimbabwe with 43 off 22, hitting five fours and two sixes. Dion Myers, who made a debut in this format, scored 35 off 22, that included two fours.

The duo kept Zimbabwe on course of the big total as the hosts amassed 91 runs in 10 overs. However the dismissal of both of them in quick succession stalled their progress.

Opener Wessley Madhvere was the other notable scorer with run-a-ball-23.

Fast bowler Mustafizur Rahman was the most successful bowler for Bangladesh with 3-31 while Mohammad Saifuddin and Shoriful Islam took two wickets apiece.

Victory maintained the dominance of the Tigers on a first all-format tour to the Southern Africa nation since 2013.

They began by winning a one-off Test and then triumphed in all three one-day internationals. The T20 series continues on Friday and concludes on Sunday.