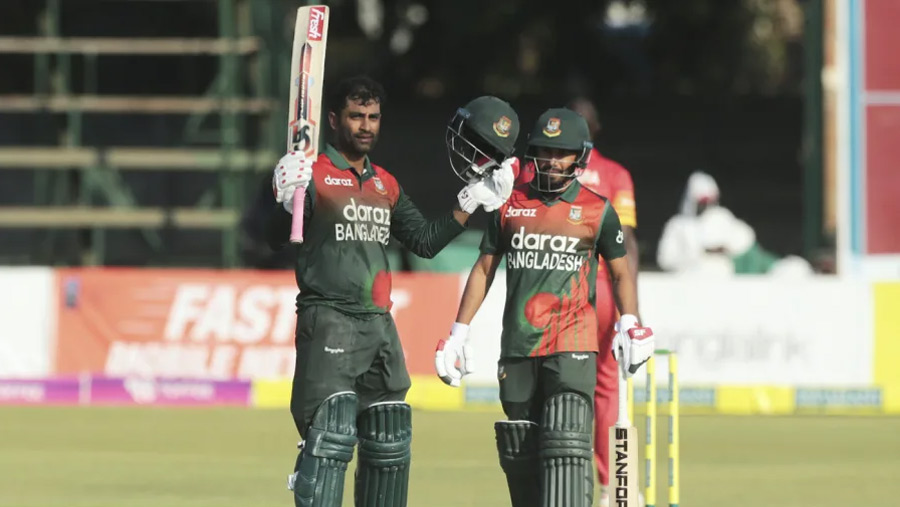 Bangladesh captain Tamim Iqbal defied a knee injury to score 112 and set up a five-wicket victory and a 3-0 one-day international whitewash of Zimbabwe on Tuesday (Jul 20). The hosts posted 298 in 49.3 overs and the visitors reached 302-5 with 12 balls to spare at an overcast Harare Sports Club.

Skipper Tamim Iqbal's forceful 112 off 97 balls set up Bangladesh's 299 chase before Nurul Hasan, playing his first ODI in nearly five years, put the finishing touches with his 39-ball unbeaten 45 to give the visitors a five-wicket win.

The Tigers collected full points for the World Cup Super League from the ODI series by winning 3-0 as Zimbabwe, despite batting well in this game, fell into disarray with the ball, and the chase was completed with two overs to spare.

Even after removing a rampant Tamim and Mahmudullah off consecutive balls, the home side couldn't stop Nurul and Mohammad Mithun from adding 64 for the fifth wicket, before Nurul and Afif Hossain, unbeaten on a 17-ball 26, finished the job.

Tamim struck his fastest ODI century, his 14th in the format with eight fours and three sixes. His crucial contribution was in the form of three partnerships: he added 88 with Liton Das for the opening stand before adding 59 with Shakib Al Hasan and 57 with Mithun for the next two wickets.

Tamim pushed Bangladesh's chase into the next level as early as the eighth over. He struck a six and two fours off Tendai Chatara, who conceded 19 runs in the over. He hammered his second six off a Donald Tiripano free hit, before Das fell top-edging Wessley Madhevere to backward square leg off a sweep, for 32.

Shakib couldn't forgive himself after under-edging Jongwe, having scored a comfortable 30 off 42 balls. Tamim hardly let go of any scoring opportunities even after Shakib's dismissal. After sweeping Burl for four, he moved into the nineties with a whip off Jongwe.

Tamim reached his century in the 30th over when his drive off Chatara went through mid-off's legs for four. But Tiripano removed Iqbal and Mahmudullah off the first two balls following the drinks break, getting both caught behind to loose shots. Two in-form senior batters gone in a matter of minutes must have worried the Bangladesh dressing room, but Nurul didn't seem too bothered.

He opened his account, off the hat-trick ball, with a steered four through point, before hammering Jongwe for two fours – a whip across square leg, and chipped over mid-on. Nurul had another brace of boundaries off Tiripano during his nine-ball over, which ended with wicketkeeper Chakabva dropping Mithun.

It didn't cost Zimbabwe anything as Mithun fell on the same score, 30, by holing out to long-off off Madhevere. Afif then completed the job by hitting three fours and a six, two of those taking Bangladesh to the target.

Zimbabwe's bowling had fallen apart by then, having conceded 27 extras, apart from missing a few run-out chances and Chakabva dropping a chance. But it was a much improved batting effort from the home side.

Chakabva's career-best 84 kept the Zimbabwe innings together, as he struck seven fours and a six in his 91-ball knock while being promoted to open. He added 71 runs for the third wicket with the rookie Dion Myers, but Zimbabwe were in the middle of a mini-collapse when Chakabva got out.

But Raza's six fours and a six in the next seven overs – sweeping, pulling and driving with class – calmed the home side's nerves. Burl, who had nurdled 12 runs off 25 balls until the 45th over, then took over with his burst of boundaries.

He struck 47 runs off his next 18 balls, that started with two fours off Taskin Ahmed in the 45th over, before flat-batting Mustafizur Rahman for his first six. Next over, he flicked Mohammad Saifuddin for two consecutive sixes on the leg side. When Shakib dropped him at the deep-fine-leg boundary, Burl reached his second ODI fifty, off 38 balls.

Mustafiz stopped the carnage by removing Raza in the 48th over for 57 off 54 balls, with seven fours and a six, before Saifuddin dismissed Burl, Tiripano and Chatara in the following over. This 13-ball phase had a big impact on the game ultimately, as a further 15 runs may have given Zimbabwe a psychological strength.