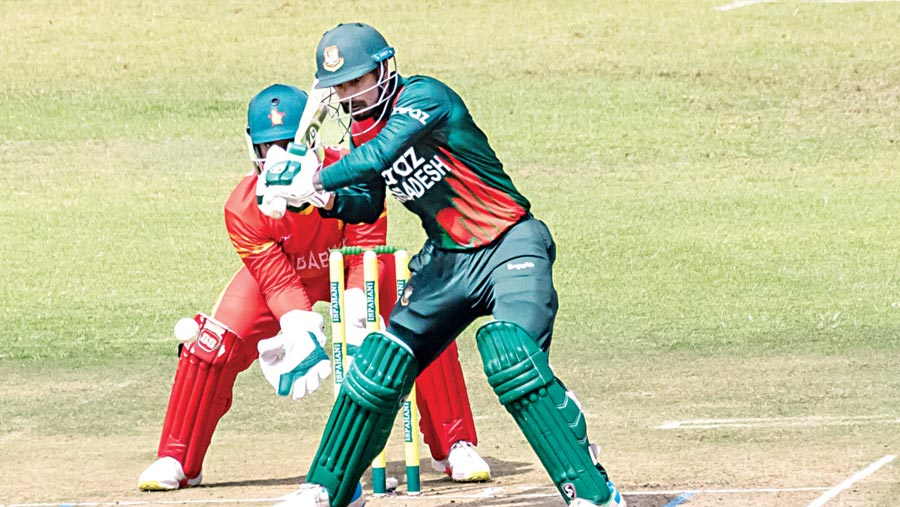 Liton Das made a comeback hundred and Shakib Al Hasan reached the pinnacle of Bangladesh's wicket-takers in ODIs by taking a five-wicket haul as the visitors crushed Zimbabwe by 155 runs in the first ODI in Harare. The home side once again suffered a batting collapse after they gave away the advantage of having Bangladesh pinned at 76 for 4 when they bowled first.

Shakib took the big wicket of Brendan Taylor, the Zimbabwean captain who was playing his 200th ODI, to go past former captain Mashrafe Mortaza's tally of 269. He finished with the third five-wicket haul in his ODI career.

But it was Liton's 102 that set up the Tigers' 276 for 9 in 50 overs after being sent to bat first. It was his first fifty after eight innings, a patch that cost him his place in the side in their last ODI in May. Das was picked for this game after regular wicketkeeper Mushfiqur Rahim left the tour because of a family matter. He fought through a batting collapse and a wrist injury to add 93 runs for the fifth wicket with Mahmudullah.

Zimbabwe themselves collapsed from 78 for 3 to be all out for 121 runs in the space of 14.4 overs. After debutant Tadiwanashe Marumani dragged a Mohammad Saifuddin delivery on to his leg stump in the second over, Taskin Ahmed sent Wesley Madhevere's middle stump tumbling to reduce Zimbabwe to 13 for 2 in the fifth over.

Dion Myers, the other debutant for Zimbabwe, promised with his three boundaries but holed out to deep square leg when he top-edged a pull off Shoriful Islam.

Then came Shakib's big moment when he overtook Mashrafe as Bangladesh's highest wicket-taker in ODIs. Taylor top-edged a sweep and was caught by Taskin Ahmed at short fine leg.

Regis Chakabva put up a fight with some boundaries, but wickets kept falling at the other end. Ryan Burl's slog sweep went to deep midwicket's hands before Luke Jongwe jaunted out of the crease only to be run out. In both cases, the fielder was Afif Hossain.

Shakib then got Blessing Muzarabani lbw, had Chakabva caught at midwicket and Richard Ngarava caught behind. Zimbabwe didn't have the service of Timycen Maruma after he got injured while fielding a ball in the 35th over of the Bangladesh innings.

When Bangladesh batted first, Liton's century helped them to a position of strength as they entered the death overs before Afif took over. He clattered couple of sixes and a four in his 35-ball 45 and added 58 runs for the seventh wicket with Mehidy Hasan Miraz. It gave Bangladesh 77 runs in the last ten overs.

It was a far cry from how the visitors began their innings. Muzarabani removed Tamim Iqbal and Shakib within nine overs. Both Mohammad Mithun and Mosaddek Hossain poked at the ball to be caught behind. Bangladesh were reduced to 76 for 4 in the 19th over, a similar tale to their last four ODIs.

Liton and Mahmudullah turned things around with regular ones and twos, hitting just two fours between overs 20 to 30. Mahmudullah struck one six in his steady 33, which seemed designed for bigger things but he fell to Jongwe's slower bouncer.

But the 93-run stand with Mahmudullah seemed to invigorate Das, who changed gears with a string of boundaries to get into the 90s. He reached his hundred off 110 balls before falling in the 42nd over, top-edging Ngarava. Afif and Miraz followed it up with their seventh wicket stand, hitting three sixes and two fours collectively.

Jongwe brought things back for Zimbabwe with a three-wicket penultimate over in which he removed Afif and Miraz, before Taskin Ahmed was run out. He finished with three wickets while Muzarabani and Ngarava took two wickets each. Despite how well these pace bowlers started, Zimbabwe couldn't quite build on it.

Liton named the Player of the Match for his heroic 102-runs' innings.

The two sides will engage couple of more occasions on Jul 18 and 20 respectively.