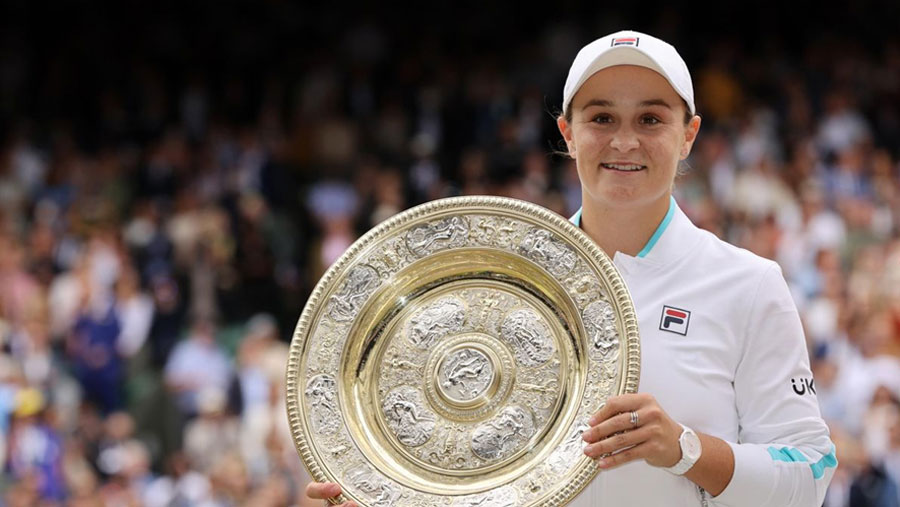 Ashleigh Barty won her first Wimbledon title on the 50th anniversary of fellow indigenous Australian Evonne Goolagong Cawley's maiden crown, beating Karolina Pliskova 6-3, 6-7 (4/7), 6-3 in the final on Saturday (Jul 10). The 25-year-old Australian – who wore a specially-designed dress in tribute to Cawley's iconic scallop one she sported in 1971 – adds the Wimbledon crown to her 2019 French Open title.

Ashleigh Barty won her maiden Wimbledon title as she beat Karolina Pliskova in a nervy final to become the first Australian women's champion for 41 years.

"This is incredible," said Barty, who dropped to her knees in tears.

"It took me a long time to verbalise, to dare to dream it and say it."

After climbing up into the stands to hug her team, she told the Centre Court crowd: "I didn't sleep a lot last night. I was thinking of all the what-ifs. I hope I made Evonne proud.

"I have to thank every single person in this stadium. You've made my dream so special."

Both women were making their debut in the final of the grass-court Grand Slam – the first time since 1977 that had happened – and that may go some way to explaining the rollercoaster nature of the match, which felt at times more like a battle of the minds.

After Barty's flying start, Czech Pliskova settled in the second set, rediscovering her big serve before errors crept back in the third.

Barty had the chance to serve out victory in the 12th game of the second set but she was broken as Pliskova forced a tie-break, which the Czech won when the Australian double-faulted.

Barty took an early break in the third, which proved decisive as she added the Wimbledon trophy to the French Open title she won in 2019.