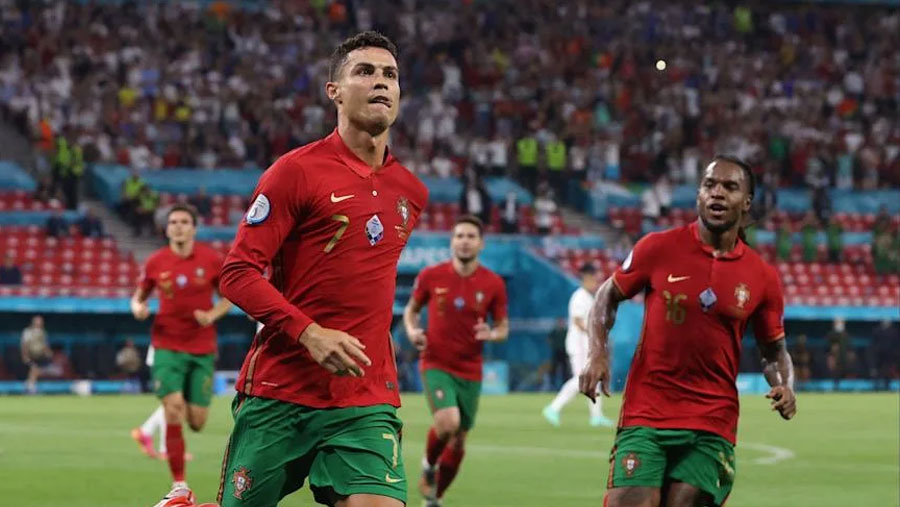 Cristiano Ronaldo scored two penalties to equal the all-time international goalscoring record and help holders Portugal edge into the last 16 of Euro 2020 with a 2-2 draw against France in Budapest on Wednesday (Jun 23). Portugal will face the world's top-ranked side Belgium in the first knockout round in Seville on Sunday.

Cristiano Ronaldo equalled the men's all-time international goalscoring record as defending champions Portugal drew with France to qualify for the last 16 of Euro 2020 as one of the best third-placed teams.

They came either side of half-time but were not enough to give Portugal victory as striker Karim Benzema broke a six-year goal drought with France to score twice and ensure Les Bleus topped the group.

On a frantic evening, the four teams in Group F changed positions frequently, with Portugal looking set to face England in the next round before Germany's dramatic late equaliser bumped them from fourth to second and eliminated Hungary.

Ronaldo gave Portugal the lead after Hugo Lloris followed through on Danilo as he attempted to punch away a cross, before Benzema equalised on the brink of half-time after Nelson Semedo was adjudged to have blocked off Kylian Mbappe's run in the box.

Benzema scored a second immediately after the restart following a stunning pass from Paul Pogba but Ronaldo drew Portugal level when he won and converted a second penalty 13 minutes later.

The draw in Munich meant Portugal finished in third place based on a head-to-head record, while France topped the group, a point ahead of Germany.