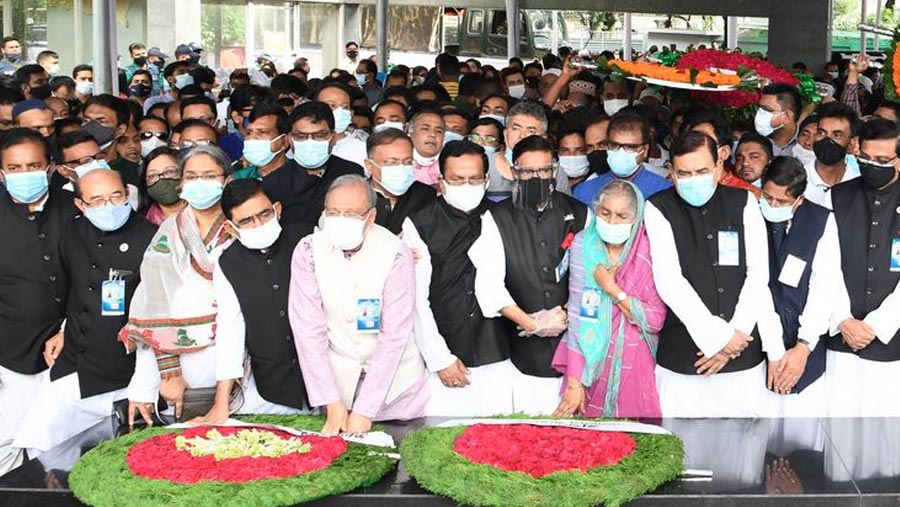 Bangladesh Awami League, one of the country's oldest political parties, celebrated its 72nd founding anniversary on Wednesday (Jun 23) on a limited scale with different programmes particularly on virtual media in the wake of coronavirus outbreak. Due to the ongoing pandemic situation, all the adopted programmes were organized on a limited extent by maintaining proper hygiene rules, local media reported.

Founded on this day in 1949, Awami League has been transformed into an organisation of masses by leading all the democratic-political-social-cultural movements including the long arduous struggle for freedom and the War of Liberation.

To mark the anniversary, national and party flags were hoisted atop all party offices including the Bangabandhu Avenue central office in Dhaka.

The programmes included placing of wreaths at the portrait of Father of the Nation Bangabandhu Sheikh Mujibur Rahman on the premises of Bangabandhu Bhaban at Dhanmondi in the capital and at the mausoleum of Bangabandhu at Tungipara in Gopalganj in the morning maintaining health guidelines.

On the occasion of the founding anniversary of Awami League, the programme was started in the morning with the laying of wreaths at the portrait of Father of the Nation Bangabandhu Sheikh Mujibur Rahman.

To mark the day, Prime Minister Sheikh Hasina paid homage by placing wreath to the portrait of Bangabandhu in front of Bangabandhu Bhaban in city's Dhanmondi Number 32 area in the morning.

Following placing wreath, Awami League President and Prime Minister Hasina stood in solemn silence for a while paying homage to the memory of Bangabandhu, the architect of independence.

Later, Awami League General Secretary and Road Transport and Bridges Minister Obaidul Quader, flanked by party's top leaders placed another wreath at the portrait of Bangabandhu on the occasion.

As part of the programme, the Kendrio Sangsad, led by Awami League Presidium Members Lt Col (retd) Muhammad Faruq Khan, paid homage at the tomb of the Father of the Nation at Tungipara at 11 a.m.

Awami League organized a discussion meeting at the central office of the Awami League on Bangabandhu Avenue in the afternoon.