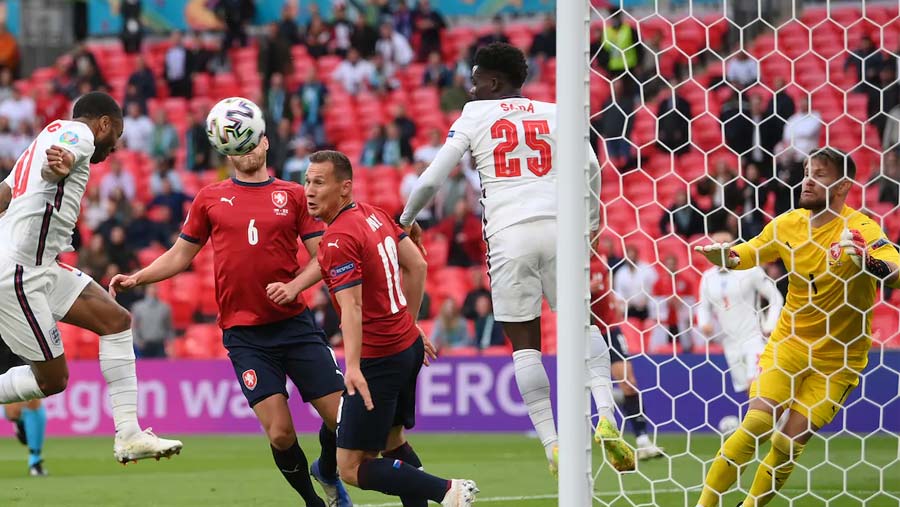 England defeated the Czech Republic 1-0 on Tuesday (Jun 22) to clinch Group D in the Euro 2020 with 7 points. Raheem Sterling scored the winning goal with a header in the 12th minute at London's Wembley Stadium.

Raheem Sterling's second goal of Euro 2020 saw England beat the Czech Republic to win Group D and set up a last-16 tie against France, Germany, Portugal or Hungary at Wembley.

In a performance that developed into a slog after a bright start, Sterling converted at the far post in the 12th minute from Jack Grealish's cross after fine work from Bukayo Saka.

Grealish and Saka were two of the hosts' better performers on a night when England were workmanlike and had to do without Mason Mount, self-isolating after coming into close contact with Scotland's Billy Gilmour after the second group game.

Southgate also had the bonus of Harry Maguire safely completing 90 minutes in his first game since suffering ankle ligament damage in early May.

Captain Harry Kane is still seeking his first goal of Euro 2020, although he was denied by a first-half save from keeper Tomas Vaclik.

At the other end, Jordan Pickford was rarely threatened, although he did pull off a fine diving save from Tomas Holes in the first half on a night when England got the job done – although a greater test than this now lies ahead.

That will come in the shape of the runner-up in Group F at Wembley on Tuesday (Jun 29). The final Group F games take place on Wednesday, with Germany facing Hungary and Portugal playing France.

In another group match, Croatia earned a 3-1 win over Scotland to qualify as runners-up in Group D with four points.