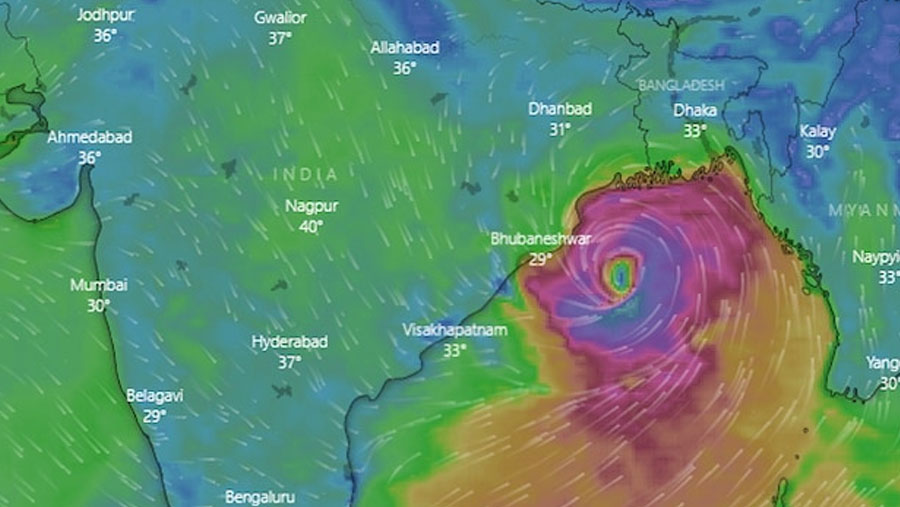 The “Yass”, which the meteorologists called a “very severe” cyclone, made its landfall ravaging India’s North Odisha-West Bengal coasts and largely sparing neighbouring Bangladesh but the met office warned the full moon phase later tonight could linger its impact.

“Under the influence of steep pressure gradient and the full moon phase, the low lying areas of the (coastline) districts... are likely to be inundated by 3-4 feet height above normal astronomical tide,” said the last met office bulletin issued this afternoon.

A meteorologist said the full moon was supposed to expected high tide period in the sea, intensifying the fears that the situation would worsen in the evening as the tide rises to a higher level than normal because of the astronomical coincidence.

The bulletin, issued this afternoon, lowered the local cautionary signal number 2 from 3 for Chattogram, Cox’s Bazar, Mongla and Payra seaports and the adjoining areas and islands.

It said those areas could witness gusty winds with a speed of 60 to 80 kilometers per hour (kph) alongside “heavy to very heavy” downpours and simultaneously asked all fishing boats and trawlers on the north bay and deep sea to remain in shelters until further notice.

State minister for disaster management and relief Dr Enamur Rahman, meanwhile, told a media briefing that though the “Yass” largely spared Bangladesh coastlines unlike that of Indian ones, 27 upazilas in nine coastal districts were hit by the residual onslaughts of the deadly storm.

He said official assessments were underway to gauge the cyclone damage as field level reports suggested the tidal surges leveled or washed away hundreds of homes and other vulnerable structures and cattle, splitting the coastal embankments at many places.

“This was the worst flooding we saw since the Sidr 2008,” a resident of Bhola was heard telling a TV channels while he was supplemented by several others in the neighbourhood.

The state minister said geo-bags, which are made of non-woven geo-textile, were being used at the affected embankment sites to repair the damage and prevent influx of gushing waters inside mainland or localities.

He said the local administrations so far distributed 16,500 packets mostly containing dry food at the affected areas where 76,000 volunteers including Red Crescent workers, scouts and ansar-vdp personnel were still carrying out the relief and rehabilitation campaign.

According to the state minister 20,000 people were evacuated to cyclone shelters in Bangladesh coastlines while most of them returned home by now.

Field level officials said in Bhola at least 36 low-lying villages were inundated and around 15,000 people are suffering from clogged waters as the rivers overflew above danger levels due to super cyclone.

“Many people in these low-lying areas were left marooned,” said deputy director of the district cyclone preparedness programme Md. Abdur Rashid adding some 13,000 volunteers were working in the areas to mitigate people’s sufferings.

Officials reported the Yass to have inundated several hundred villages and damaged a number of dams in Khulna and Satkhira.

According to district administrations, several dams, situated at Shyamnagar, Ashashuni, Dakop and Koyra upazilas in Khulna and Satkhira were damaged while 20 villages in the last two upazilas were severely inundated rendering hundreds of families homeless.

“At least 50 points of several dams in the two districts have been damaged due to tidal surge,” Water Development Board (WDB) executive engineer Md Rashed told a BSS reporter adding works were underway to repair the damages with the help of residents in those areas.

In Patuakhali, more than 20 villages in Rangabali upazila alone went underwater after two river embankments were washed away, officials said.

The Yass also left its mark on the country’s lone coral island of St. Martins inundating several hundred homesteads and damaging roads and culverts while the storm affected largely the mainland of Cox’s Bazar and islands under its administrative jurisdiction.