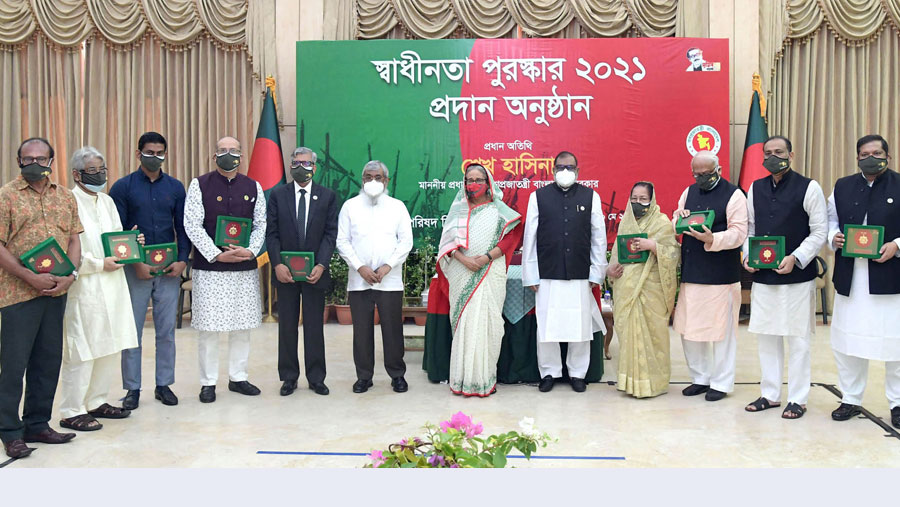 The Independence Award recipients received this recognition for their glorious and outstanding contribution to their respective fields. Cabinet Secretary Khandker Anwarul Islam moderated the function and read out the citations with brief life sketch of the recipients.

Among them, AKM Bazlur Rahman, Shaheed Ahsanullah Master, Freedom Fighter Brigadier General Khurshid Uddin Ahmed, and Akhtaruzzaman Chowdhury Babu were given this award posthumously for their contributions to independence and the War of Liberation.

Besides, Dr Mrinmoy Guha Neogi received this highest state award for his contributions to science and technology while Mohadeb Saha for literature, Ataur Rahman and Gazi Mazharul Anwar for culture, and Professor Dr M Amjad Hossain for social works.

In addition, Bangladesh Agricultural Research Council received the award in the research and training category.

Ataur Rahman, on behalf of the awardees expressed his feeling on receipt of the highest civilian award.

Each award recipient received a gold medal, a certificate and a cheque of honorarium from the PM.

Since 1977, Bangladesh has honoured individuals and institutions with the award every year ahead of Independence Day on Mar 26.