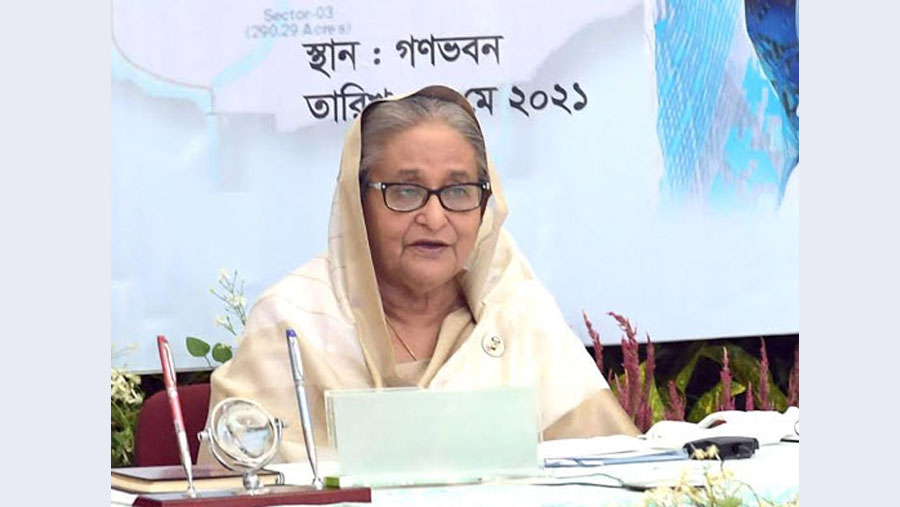 Prime Minister Sheikh Hasina on Sunday (May 9) urged the countrymen not to put their near and dear ones’ lives into threat rushing to village homes to celebrate Eid-ul-Fitr.

“I know people are rushing towards villages on the eve of Eid-ul-Fitr. You may come in contact with the coronavirus on ferry or in vehicle on your way as you don’t know who is infected with the virus and you bring it to your family, father-mother, grandfather-grandmother, brother-sister and others. You can infect them and put their lives in risk,” she said.

She simultaneously called for taking precautionary measures to be protected from the variant found in a neighbouring country that claims lives frequently.

The PM was addressing a function to distribute plot allotment letters to 1440 remaining main inhabitants and general people affected by the Purbachal New Town Project held at the Bangabandhu International Conference Centre (BICC) in the capital, local media reported.

Joining virtually from her official Ganabhaban residence in Dhaka, she called upon the countrymen to be patient thinking of the welfare of own self and family as well, saying “what else damage” will take place if one Eid is not celebrated staying at home.

She added: “So, don’t move, stay at the places where you are right now and enjoy the Eid as you wish.”

About the new variant of the Covid-19, the premier said a new virus variant has come which is more harmful and fatal and urged all to wear masks and be careful about it to keep all protected.

She mentioned that people are dying in Bangladesh and elsewhere across the globe due to the Covid-19 pandemic.

The PM said, “People are dying regularly in our neighbouring country. It is quite natural that whatever happens to our neighbor, it may have the chance to come to our country. So, we have to be protected well before and we have to move that way.”

State Minister for Housing and Public Works Sharif Ahmed, Chairman of the parliamentary standing committee on the ministry Engineer Mosharraf Hossain, MP, its Secretary Md. Shahid Ullah Khandaker and Chairman of Rajdhani Unnayan Kartripakkha (RAJUK) A B M Amin Ullah Nuri, spoke on the occasion from the BICC end.

On behalf of the PM, the state minister later handed over the plot allotment letters to the people affected by the Purbachal New Town Project.

Earlier, a video documentary on the project was screened on the occasion.

She added: “The people who really deserved the plots had long been deprived. So, I am always trying to relieve you from the deprivation. It cannot happen that you will not get plots after giving lands.”

The PM said that she even did not give approval to a project to construct “Bangabandhu Memorial Tower” at Purbachal to preserve the memory of the Father of the Nation marking the celebration of the Mujib Borsho as the deprived people were yet to get the plots.

She said that she will now approve the project as plots have been distributed among the deprived people.

The PM said that her government has been tirelessly working to develop such planned cities in all the districts to ensure civic amenities for the village people as everyone has the desire to reside in a city.

“We will develop planned housing in every division and district – it will no longer be Dhaka centric to ensure better life for the people (everywhere),” she said.

She renewed her vow that not a single person of the country will remain homeless, saying, “In any way, we will give a person a home to take shelter and all the houses will be brought under electricity coverage and each of the houses will have educated people.”

The premier gave a brief description of the measures taken by her government to give home to the homeless and landless people since assuming office in 1996.

Sheikh Hasina said that she has taken the project of giving shelters to all the landless and homeless people following the idea of the Guchhagram project taken by Father of the Nation Bangabandhu Sheikh Mujibur Rahman that started from Noakhali, as Bangabandhu considered giving homes to the people as a means to alleviate poverty.

The PM said that Bangabandhu had taken a project on building low-cost housing in 1974 and built a research institute to this end in 1975, adding that the Father of the Nation could not complete it as he along with most of his family inmates were murdered on Aug 15 in 1975.