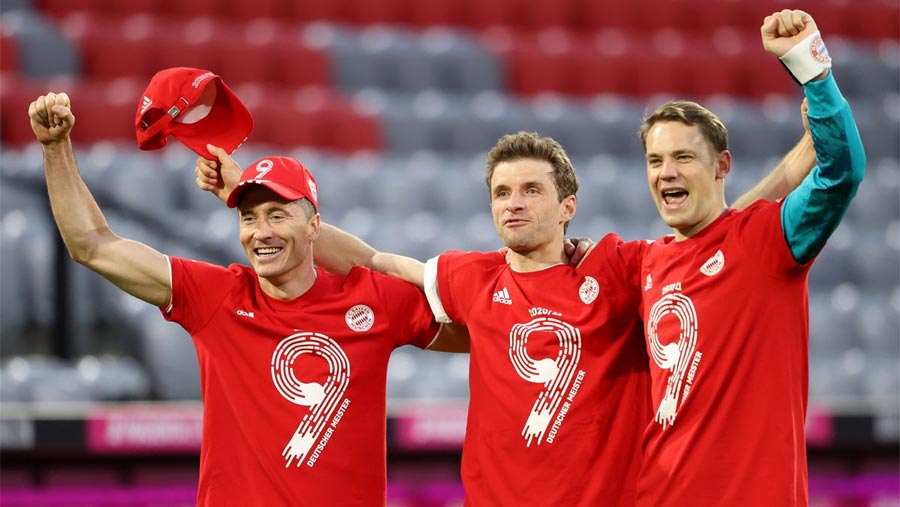 Bayern Munich celebrated their record-extending ninth consecutive Bundesliga title on Saturday (May 8) with a 6-0 demolition of Borussia Moenchengladbach and a hat-trick from Robert Lewandowski, who edged closer to a 49-year-old scoring record.

The champions had sealed the title before kickoff following RB Leipzig’s 3-2 defeat at Borussia Dortmund earlier on Saturday.

Lewandowski, who now has 39 goals, one shy of Gerd Mueller’s imposing record of 40 league goals in one Bundesliga season dating back to 1971/72, needed only two minutes to open his account with a shot from a tight angle.

Thomas Mueller, who along with David Alaba becomes the first player in Bundesliga history to win 10 league titles, stabbed in their second in the 23rd before a sensational flying Lewandowski volley 11 minutes later.

With Gladbach in the role of mere observers, Lewandowski then set up Kingsley Coman, who wrapped up a quick break with a powerful shot a minute from halftime.

Lewandowski sent keeper Yann Sommer the wrong way to convert a 66th minute penalty for his hat-trick and a clear shot at Mueller’s record with two games left.

Tanguy Nianzou was sent off in the 75th with a straight red card for a rustic challenge five minutes after coming on, but even with 10 men Bayern scored again, with Leroy Sane slotting in four minutes from the end.

Bayern, who have now won 30 Bundesliga titles since the introduction of the top division in 1963, and 31 German league crowns in total, are on 74 points, with Leipzig in second on 64 following their 3-2 loss at Dortmund, who move up to fourth.

Bayern may have enjoyed less success this season than their astonishing six-trophy run in 2019-20, but they have remained the most consistent team in the league led by Lewandowski.

It is also the second consecutive league crown for coach Hansi Flick, who is leaving Bayern at the end of the season and will be replaced by Julian Nagelsmann.