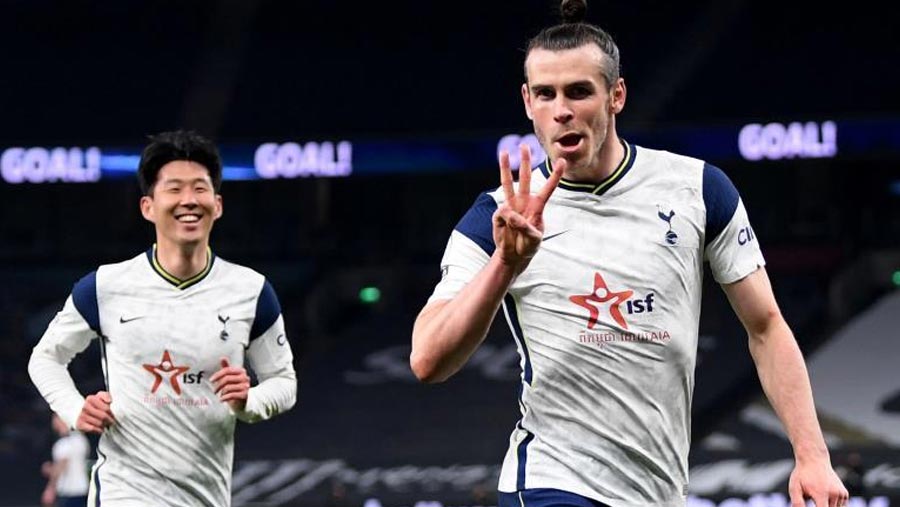 Gareth Bale scored a hat trick as Tottenham Hotspur stayed in the UEFA Champions League qualification race with a 4-0 win over relegated Sheffield United on Sunday (May 2).

Bale claimed his first treble since returning on loan from Real Madrid for this season, and Son Heung-min also netted, as Tottenham rose to fifth place – five points behind Chelsea with four games left to play.

Bale took his English Premier League tally to eight goals in the last eight games, but with that must come a sense of what might have been this season.

Bale was under-used by former manager Jose Mourinho, even when he had regained peak condition. Playing with freedom in a front four with Harry Kane, Son and Dele Alli, Spurs were a constant threat and a far cry from the pragmatic style that dogged Mourinho’s era.

It may have come too late to gatecrash the top four this season, but playing like this makes them a strong bet to finish in a Europa League spot under interim manager Ryan Mason.

The onslaught started early as Son forced Aaron Ramsdale into a smart stop, with the Blades goalkeeper getting a strong hand to a low shot that was heading into the bottom corner.

Kane, on the march for a third Premier League golden boot, uncharacteristically missed two chances he would normally convert, first seeing a shot blocked after slaloming into the area and then sending Sergio Reguilon’s pullback embarrassingly over.

But Spurs finally went ahead in the 36th minute with a moment of quality.

Bale broke from deep to latch on to Serge Aurier’s ball over the top and then sent it past Ramsdale with a cute finish with the outside of his boot.

The Wales international was back in the starting lineup after coming off the bench in the League Cup final and delivered his 12th goal in all competitions.

Spurs were cursing VAR twice in the opening seven minutes of the second half.

First Peter Bankes ruled that John Fleck did not commit violent conduct when he appeared to stamp on Giovani Lo Celso’s face and then VAR ruled out a goal by Son, judging the S. Korean’s armpit to be in an offside position when he ran on to Toby Alderweireld’s long ball.

The hosts were not denied for long, however, as they did double their lead just after the hour with a devastating counterattack.

After clearing Sheffield’s corner, Son evaded two challenges and sent Bale clear on goal, with the Welshman delivering an emphatic finish into the top corner.

Bale, whose future next season remains unclear, then completed his hat trick with another moment of quality, drilling in a low effort after a fine team move which involved Alli and Aurier.

Bale’s treble was of a high standard, but Son may lay claim to scoring the goal of the night with 13 minutes remaining.

Son received the ball on the left from Steven Bergwijn, cut inside and sent a curling effort from 20 yards in off the far post.