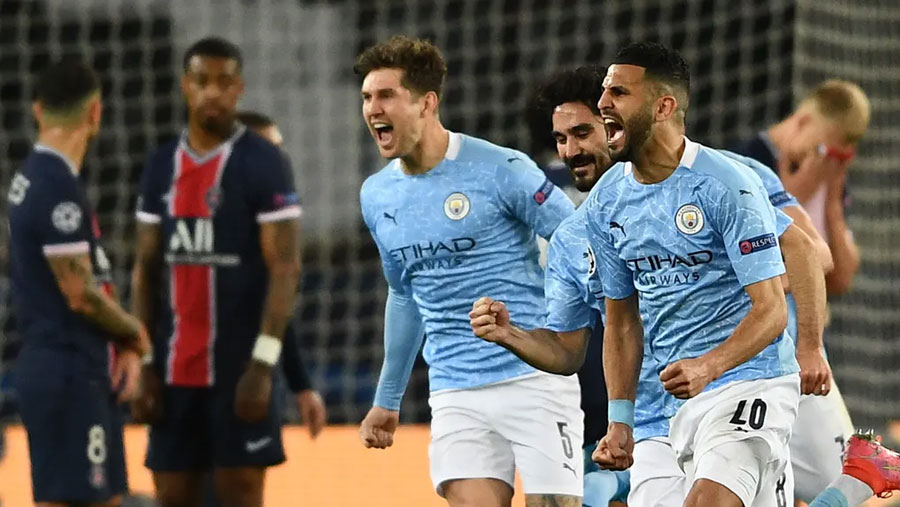 Manchester City took a big step towards their first Champions League final as goals by Kevin De Bruyne and Riyad Mahrez earned them a 2-1 comeback win at Paris Saint-Germain in the semifinal first leg on Wednesday (Apr 28).

Manchester City produced a superb display to come from behind and take control of their Champions League semi-final with victory against Paris Saint-Germain in France.

Pep Guardiola’s side fought their way through a scintillating early PSG surge when they fell behind to Marquinhos’ header, glanced in from Angel di Maria’s corner after 15 minutes, to dominate after the break and turn this first leg tie in Paris on its head.

Man City, who had threatened before the break when Phil Foden missed a great chance, were much more positive and got the reward they deserved after 64 minutes when Kevin de Bruyne's menacing cross evaded everyone in the penalty area and drifted beyond motionless PSG keeper Kaylor Navas.

PSG, with Neymar fading and Kylian Mbappe subdued, were ragged and Riyad Mahrez put City in a great position to reach their first Champions League final when his left-foot free-kick went through the wall to beat Navas seven minutes later.

And to complete PSG’s misery, former Everton midfield man Idrissa Gueye was rightly shown a red card late on for a dreadful challenge on Ilkay Gundogan.