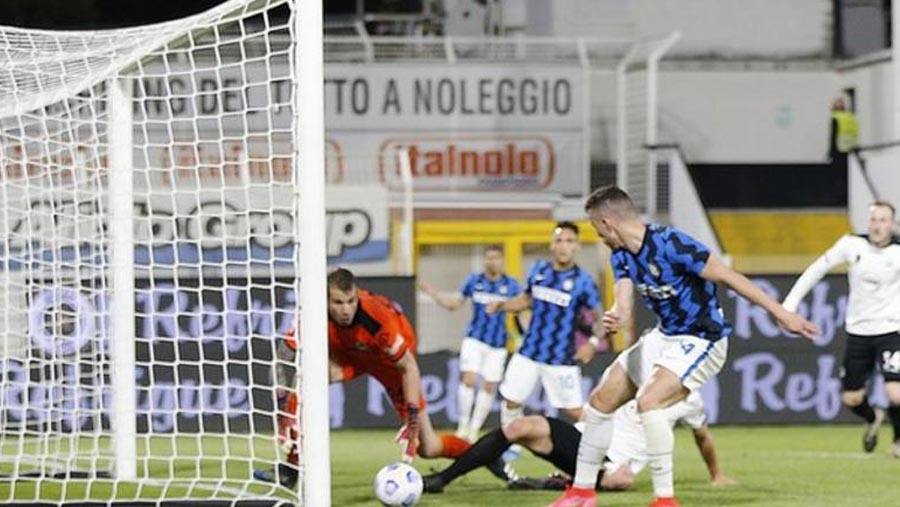 Inter Milan was held to a 1-1 draw at relegation-threatened Spezia but still extended its lead at the top of the Serie A table on Wednesday (Apr 21).

Inter Milan edged closer to their first Scudetto since 2010 with a 1-1 draw at Spezia that took them 10 points clear at the top of Serie A. Diego Farias’ early goal put the hosts in front but Ivan Perisic levelled for Antonio Conte’s side.

Earlier on Wednesday, AC Milan’s hopes of catching their city rivals were dented by a 2-1 home loss to Sassuolo.

Meanwhile, Juventus came from behind to beat struggling Parma 3-1 and boost their hopes of a top-four finish. A double from full-back Alex Sandro helped Andrea Pirlo’s side recover after Gaston Brugman’s opener before Matthijs de Ligt rounded off the scoring.

Sassuolo coach Roberto de Zerbi had said he wanted to boycott his team's trip to Milan after they were named as founder members of a new European Super League on Sunday, alongside Inter and Juve.

And prior to kick-off Milan legend and club director Paolo Maldini apologised to fans for his club’s involvement in the collapsed project.

Fourth-placed Atalanta, who are two points behind Milan and a point behind Juve, travel to Roma on Thursday (17:30 GMT).