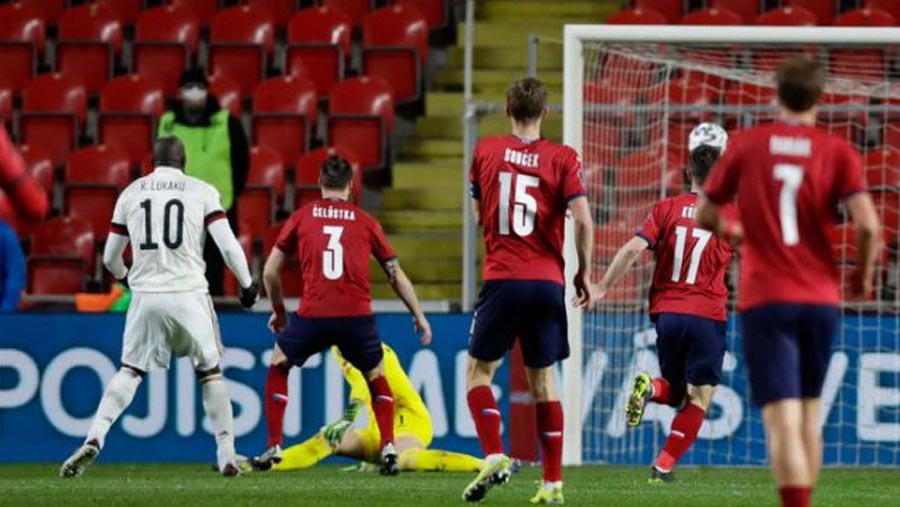 The game played behind closed doors because of Covid-19 restrictions keeps the hosts top on goal differences.

The Inter Milan striker scored on 61 minutes after fooling sweeper Ondrej Celustka with a mazy run and beating goalkeeper Tomas Vaclik to take his record international tally to 59 goals in 91 caps.

Lukas Provod sent the home side 1-0 ahead on 50 minutes with a clinical low right-footer from outside the box that slid into the bottom left corner of Thibaut Courtois's goal.

Belgium, the world number one ranked side, started in high spirits but Lukaku fired over the crossbar and Dries Mertens saw his low shot parried away by Vaclik.

The hosts got close on 16 minutes when lone striker Michael Krmencik sprinted into the box and hit Courtois's left post with a low effort.

Belgium kept trying as the rain stopped, but they failed to beat Vaclik who did well to clear Leander Dendoncker's blast before stopping Timothy Castagne's header from close range.

The Czechs dominated possession in most of the second half and came close again six minutes from time when Jan Boril hit the crossbar.

On the other side, Kevin de Bruyne hit the post on a counter-attack in the 70th minute.

Just before the final whistle, Czech midfielder Tomas Soucek saw his header headed out of the goal off the goalline by Toby Alderweireld.

Both teams were without several Germany-based players including Dortmund midfielders Thomas Meunier and Thorgan Hazard and Czech captain Vladimir Darida of Hertha Berlin.

They skipped the game on concerns they may have to go into quarantine after returning from the Czech Republic deemed as a top-risk country by Germany.

Belgium started the qualifying campaign with a 3-1 win over Wales on Wednesday, while the Czechs prevailed 6-2 over Estonia.

Belgium are now due to host Belarus on Tuesday while the Czech Republic will play in Wales on the same day, both teams having the Germany-based players back for the ties.