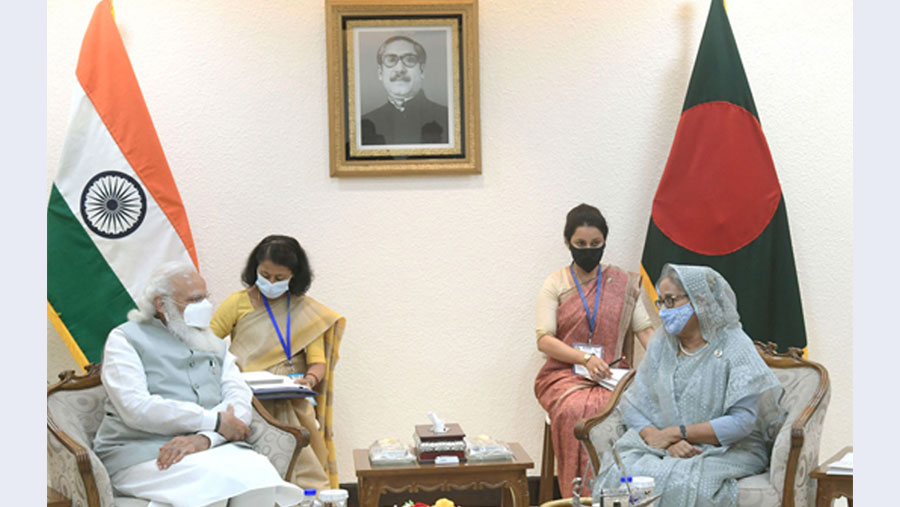 Prime Minister Sheikh Hasina on Saturday (Mar 27) sought implementation of the earlier reached proposed Teesta agreement and steps to bring down the “border incidents” to zero level as she held talks with Indian premier Narendra Modi at her office in Dhaka.

“The decision of signing a treaty was taken jointly nine years ago which is yet to be implemented,” Bangladesh PM’s Press Secretary Ihsanul Karim told a media briefing quoting Sheikh Hasina as saying during the two premiers talks.

Sheikh Hasina, he said, told her counterpart that the implementation of the proposed treaty appeared crucial as the people living along the Teesta river bank were suffering because of water shortage.

The Bangladesh premier expressed her concerns about the border incidents which she said increased in recent period and requested her counterpart to look into the matter properly to reduce the incidences to zero level.

Karim said the Indian premier told Sheikh Hasina that India was committed for a “reasonable solution” to the water sharing issues involving all common rivers with Bangladesh.

Modi, he said, also acknowledged the issue of border incidents and said ground level cooperation will help check this kind of incidents.

She said the return of these people in quickest possible time was needed since the lingering of the crisis could create grounds for their involvement in terrorist activities and drug trading.

“Sooner is the better,” Karim quoted her as saying.

In response, he said, the Indian premier told Sheikh Hasina that his country wants sustainable return of the refugees in a sustainable manner.

The Bangladesh premier greeted Modi for launching successfullly the vaccination campaign particularly praising him for supplying the inoculates to other countries in the region as part of his “neighbourhood first” policy.

Sheikh Hasina said Bangladesh by now nearly exhausted the first commercial consignment of the Covid-19 vaccine from India and hope that the rest of the consignments would be delivered soon.

Modi said that Bangladesh and India are now facing the Covid-19 pandemic a situation that prompted hisn country to send as gift another consignment of 1.2 million Covid-19 vaccines and 109 life saving ambulances.

The Bangladesh premier drew her counterpart’s attention to indiscriminate imposition of anti-dumping duties which was creating unnecessary obstacles to the bilateral cooperation and sought Modi’s quick intervention to resolve the issue.

“So we must need to cooperate more meaningfully for this sector,” she said adding Dhaka extended an open invitation for foreign direct investment for Bangladesh’s state run jute mills under public-private partnership.

The PM said that Bangladesh is keen to use effectively the Indian lines of credit and put emphasis on axing ineffective projects from the list under the Indian credit.

She simultaneously sought the Indian premier’s steps so the line of credit could be disbursed quickly for quick implementation of the projects and also emphasised on increased contacts between entreprenuers between the two countries.

The Indian premier expressed his desire to be a partner to launch the Bangabandhu Satellite-2.

Sheikh Hasina said that the introduction of Moitree Setu between Bangladesh and India has added a new dimention to cooperation in the communication sector.

She said that Indian state Tripura can use Chattogram Airport alongside Chattogram and Mongla Ports.

Stating some routes to connect Bangladesh with Nepal and Bhutan, the premier expected India to consider the prospect for mutual benefits.

Sheikh Hasina also said that if the motor vehicles agreement among Bangladesh, India and Nepal is signed, all the three countries will be benefitted.

Sheikh Hasina extended her thanks to Narendra Modi for accepting positively the proposal of Bangladesh for naming “Mujibnagar-Nadia Road” as Shadhinata Sharok.

Modi said India took a decision to establish “Bangabandhu Chair” in Delhi University in memory of Bangladesh’s founder as both the premiers have reviewed the bilateral cooperation at different fields marking the 50 years of relations of the two countries.