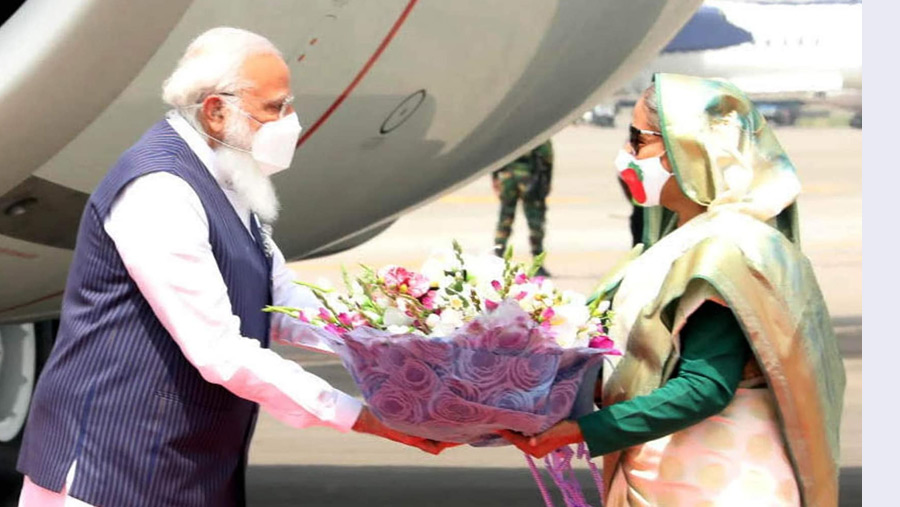 Indian Prime Minister Narendra Modi was accorded a rousing reception as he arrived here this morning on a two-day state visit to join mainly celebrations of the golden jubilee of Bangladesh’s independence and the birth centenary of Father of the Nation Bangabandhu Sheikh Mujibur Rahman.

A special aircraft of the Air India carrying the Indian premier along with his entourage members landed at the Hazrat Shahjalal International Airport in Dhaka at 10.30 in the morning, local media reported.

On his arrival at the airport, Bangladesh Prime Minister Sheikh Hasina received her Indian counterpart at the airport. A 19-gun salute heralded the arrival of Narendra Modi while a red carpet was rolled out at the airport to welcome him.

The Indian Premier became the fifth among the world leaders to attend the 10-day celebration. This is the first foreign visit of Narendra Modi since the Covid-19 onset.

A smartly-turned out contingent drawn from the Bangladesh Army, Bangladesh Navy and Bangladesh Air Force gave a guard of honour to the Indian premier.

Cabinet secretary, principal secretary to the Prime Minister and chiefs of the three armed services were also present at the airport.

After the formalities at the airport, Modi is scheduled to go straight to the National Martyrs’ Memorial in Savar to pay rich tributes to the heroic martyrs of the Liberation War of Bangladesh by placing a wreath.

Shortly afterwards, he will visit the Bangabandhu Memorial Museum at Dhanmondi 32 to pay homage to Father of the Nation Bangabandhu Sheikh Mujibur Rahman.

In the afternoon, Foreign Minister AK Abdul Momen will call on the Indian premier at Hotel Pan Pacific Sonargaon.

Later, the Indian Prime Minister will join the grand celebration program marking birth centenary of Father of the Nation Bangabandhu Sheikh Mujibur Rahman and the golden jubilee of Bangladesh’s Independence Day as the guest of honor at the National Parade Square.

President Md. Abdul Hamid will be present at the celebration as the chief guest while Prime Minister Sheikh Hasina will preside over.

In the evening, Modi is scheduled to inaugurate the ‘Bangabandhu-Bapu Museum’ jointly with Prime Minister Sheikh Hasina at the Bangabandhu International Conference Center.

He will attend a state banquet to be hosted in his honor by his Bangladeshi counterpart Sheikh Hasina.

In the morning of the second day of his visit on Saturday, the Indian premier will visit the Mausoleum of Father of the Nation Bangabandhu Sheikh Mujibur Rahman at Tungipara in Gopalganj to pay homage to Bangabandhu.

He is scheduled to visit the Orakandi temple in Kashiani upazila of Gopalganj and the Jessoreswari Devi Temple at Ishwaripur under Shyamnagar in Satkhira district.

In the afternoon, he will hold a bilateral meeting with Prime Minister Sheikh Hasina at the Prime Minister’s Office. At the same time, in the presence of the prime ministers of the two countries, various MoUs will be inked and a number of projects inaugurated virtually. Later, the Indian premier will meet President Md. Abdul Hamid at Bangabhaban.

Narendra Modi will leave Dhaka for New Delhi in the evening on Mar 27.