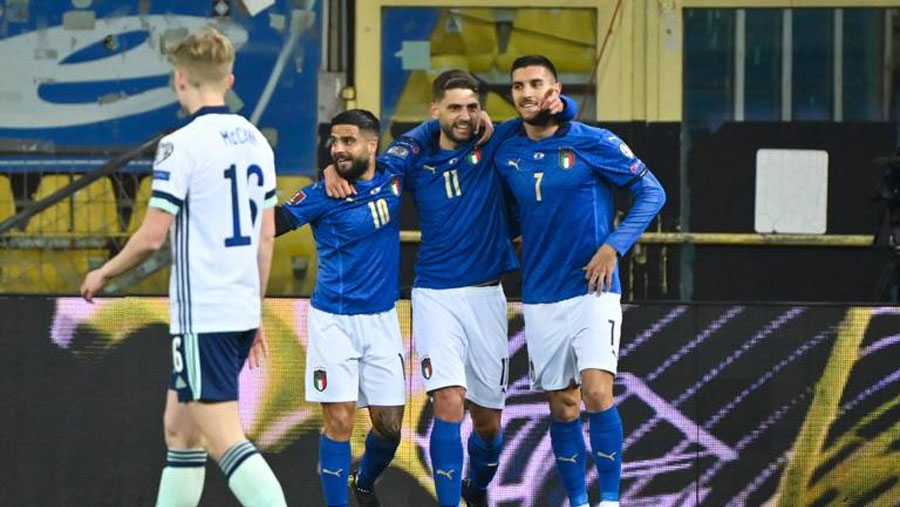 Former champions Germany, England and Italy got off to winning starts in their World Cup qualifying campaigns on Thursday (Mar 25) but Spain were held to a 1-1 home draw by Greece. Four-times winners Germany enjoyed a 3-0 win over Group J rivals Iceland in Duisburg thanks to goals from Leon Goretzka, Kai Havertz and Ilkay Gundogan.

European giants Germany, Italy and England all got off to a winning start in World Cup qualifying, while Zlatan Ibrahimovic marked his return to international soccer with an assist to help Sweden to victory on Thursday.

The 39-year-old Ibrahimovic, who last played for Sweden at the 2016 European Championship, set up Viktor Johan Anton Claesson’s first-half goal in a 1-0 win over Georgia.

Germany coach Joachim Low began his farewell tour with a 3-0 win against Iceland in Duisberg.

There was also a comfortable opening win for England, which beat San Marino 5-0 at Wembley.

After failing to qualify for the last World Cup for the first time in six decades, Italy got its campaign off to a positive start with a 2-0 win over Northern Ireland.

There was disappointment for Spain, however, as it was held to a 1-1 draw at home by Greece.

Ibrahimovic came out of international retirement ahead of this summer’s European Championship.

And it took the AC Milan forward just 35 minutes to make an impact when he controlled a pass on his chest and scooped the ball into the middle of the area, where Viktor Claesson took a touch and drove a low shot into the net from close range.

Ibrahimovic played almost the whole match before being substituted off six minutes from time.

In the other Group B match, Greece’s players celebrated loudly after holding Spain to the draw at the Nuevo Los Carmenes Stadium.

Spain hadn’t conceded at home in seven matches but defender Iñigo Martínez’s foul inside the area led to Anastasios Bakasetas’ equalizer from the penalty spot in the 57th.

Spain loudly complained about the penalty call, which could not be reviewed as there is no VAR at this stage of qualifying.

Germany took a 2-0 lead in the opening seven minutes and the result was never in doubt after that.

The opening goal came after two minutes as Joshua Kimmich lobbed into the Iceland penalty area and Serge Gnabry knocked it back for a third Bayern player, Leon Goretzka, to score with a calm finish. Five minutes later, Germany was 2-0 up after Leroy Sane cut the ball back from the left flank for Kai Havertz to hit low past Hannes Thór Halldórsson.

Germany eased off a little after that, but Ilkay Gundogan made it 3-0 in the 56th with a low shot from outside the penalty area.

It was a commanding way to bounce back from a 6-0 loss to Spain in November which heralded the end of the 15-year Löw era. He will step down as coach after the European Championship this summer.

Elsewhere in Group J, Ianis Hagi’s 86th-minute goal gave Romania a 3-2 win over North Macedonia, just after the North Macedonians had completed a comeback from 2-0 down. Liechtenstein came close to earning its first point in a World Cup qualifying campaign since 2013, but Noah Frommelt’s 83rd-minute own goal handed a 1-0 win to Armenia.

England began its path to the 2022 World Cup with the easiest of wins against the planet’s lowest-ranked national team in an empty stadium.

Ollie Watkins scored on his debut to complete a rout that began with James Ward-Prowse netting his first England goal on his fifth appearance. Dominic Calvert-Lewin’s double marked the forward’s first competitive goals for his country and Raheem Sterling took his Three Lions tally to 14.

In the other Group I matches, Albania beat Andorra 1-0 and Poland fought back from 2-0 down to draw 3-3 against Hungary.

Italy didn’t qualify the 2018 World Cup in Russia – missing the tournament for the first time in six decades – but cemented its status as the Group C favorite as Domenico Berardi and Ciro Immobile scored in the first half in Parma.

It was Immobile’s first Italy goal since 2019 and the Lazio forward – who won the European Golden Shoe last year – celebrated by punching and kicking the corner flag.

Switzerland scored all its goals in the first 13 minutes as it won 3-1 in Bulgaria in the other Group C match.

Denmark beat Israel 2-0 in front of a rare crowd of several thousand fans in this pandemic-affected season.

Fans were allowed into the Bloomfield Stadium in Tel Aviv after Israel’s world-leading vaccine rollout.

Denmark is the only one of the six teams in Group F to have played at a World Cup since the 1990s.

Scotland needed a spectacular overhead bicycle kick from midfielder John McGinn in the 85th to draw 2-2 with Austria in rain-soaked Glasgow.