PM urges policymakers to work together for prosperous South Asia 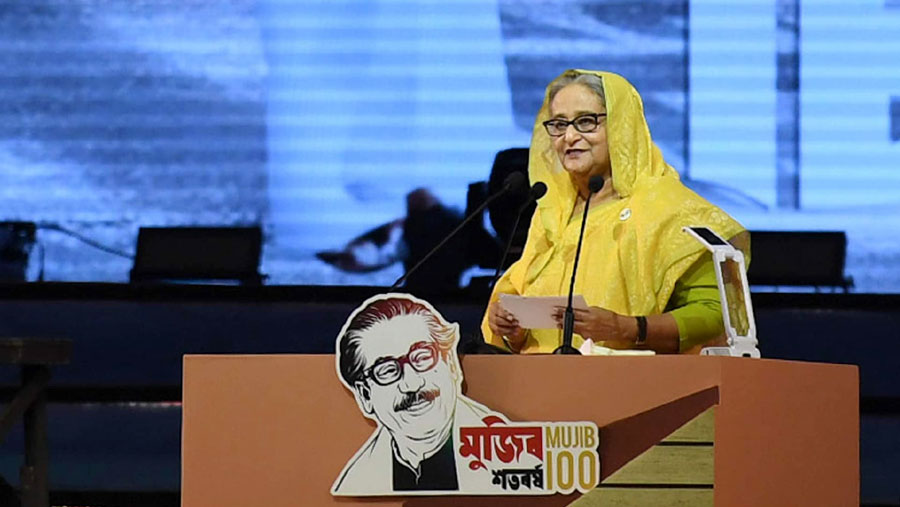 Prime Minister Sheikh Hasina on Wednesday (Mar 24) urged the political leaders and policymakers of South Asia to work in unison, saying fate of the people of this region can easily be possible to improve utilizing the endowed resources through mutual cooperation.

“We can easily improve the fate of the people of South Asia by utilizing the resources we have been endowed through exhibiting mutual cooperation,” she said.

While addressing the auspicious moment of celebrating the birth centenary of Father of the Nation and Golden Jubilee of Bangladesh’s Independence, Sheikh Hasina said “I called upon the political leaders and policymakers of South Asia to work hand in hand to build a peaceful and prosperous South Asia.”

Pointing out that the people of this region possess unbelievable spirit, innovation, and the ability to survive against natural disasters, she said “If we work together for the betterment of our people, South Asia will surely be flourished as one of the most prosperous regions in the world.”

Sheikh Hasina, who chaired the function, noted South Asia is home to about a quarter of the world population and said as much as there are challenges, there are a lot of possibilities as well in this region.

Bhutanese Prime Minister Dr Lotay Tshering joined as the guest of honor on the 8th day programmes of the 10-day grand celebrations of the birth centenary of Father of the Nation Bangabandhu Sheikh Mujibur Rahman and the Golden Jubilee of independence at the National Parade Square in Dhaka in the afternoon.

The Bhutanese Premier became the fourth among the world leaders to attend the celebrations.

The theme of the celebrations is “The Eternal Mujib” but a separate theme for each day has been selected with today’s one being “Bangabandhu: Pioneer of Peace, Freedom and Humanity”.

The PM said Bangabandhu Sheikh Mujib not only fought for the political and economic freedom of the people of Bangladesh, rather he dreamed of the emancipation of all the oppressed and deprived fraction of people in the world.

“He (Bangabandhu) was respectful to the peaceful co-existence and regional integrity, and he believed that any problem could be solved through mutual cooperation,” she said.

Referring to the final recommendation that Bangladesh has already received to shift from a Least Developed Country to developing country status, Sheikh Hasina said “In Bangladesh, we are working relentlessly to establish the hunger-poverty-free non-communal ‘Golden Bangladesh’ of the Father of the Nation Bangabandhu Sheikh Mujib.”

She expressed her optimism that Bangladesh will be a higher-middle income country by 2031 and a developed and prosperous country by 2041.

Centering the celebration event, she said, Dhaka has become a reunion place for South Asian leaders as Presidents of the Maldives and Nepal and the Prime Minister of Sri Lanka have already graced the occasion.

“Prime Minister of Bhutan Dr. Lotay Tshering is present with us today as the guest of honor. His presence has glorified the occasion as well as made us feeling honored,” she continued.

The Premier went on saying, “On behalf of myself, my younger sister Sheikh Rehana, the government and the People of Bangladesh, I would like to express my sincere thanks and gratitude to the Prime Minister of Bhutan and the friendly Bhutanese People.”

“Our gratitude to all of them,” she said, extending her thankfulness to them who sent greetings and video messages on this auspicious occasion.

Mentioning Bhutan as a very close neighbor and friendly-country, she said cooperation between Bangladesh and Bhutan in the fields of trade, commerce, communication, tourism, education, etc. is continuously growing.

A significant number of Bhutanese students are pursuing higher education, including in medicine, in various universities of Bangladesh, she noted.

“Our guest of honor today, Prime Minister Dr. Lotay Tshering studied medical education from Mymensingh Medical College. It is a matter of great pride for us. We are honoured to be a partner in Bhutan’s human resource development,” she added.

Apart from the geographical proximity, Sheikh Hasina said, both the countries have almost identical history and tradition. “Our position on various international and regional issues is characterized by uniqueness and similarity in all aspects,” she said.

Acknowledging the great support of the late third King of Bhutan Jigme Dorji Wangchuck and the Bhutanese people to Bangladesh’s great liberation war in 1971, the premier said they not only supported the freedom-loving Bengalis but also extended necessary help as much as they could.

The Bhutanese youth volunteered in various refugee camps in India to serve injured and sick Bengali refugees, she added.

She said Bhutan is the first among all countries to recognize independent Bangladesh and the country formally recognized Bangladesh on the 6th of December before achieving the final victory on 16 December 1971.

“We gratefully recollect the contribution of the people of Bhutan. We awarded Jigme Dorji Wangchuck, the third King of Bhutan, with the ‘Bangladesh Liberation War’ accolade in 2012 for his outstanding contribution to the great liberation war of Bangladesh,” she said.