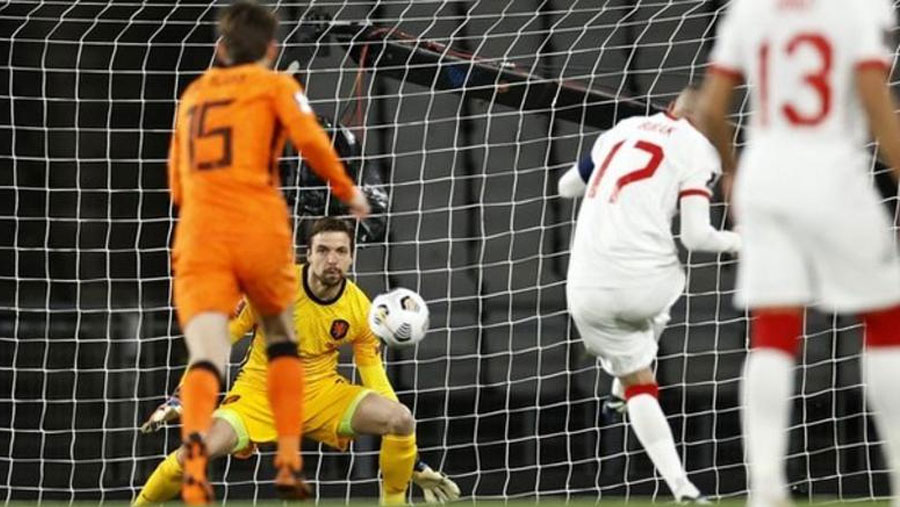 Holders France got their World Cup qualifying campaign off to a disappointing start with a 1-1 draw at home to Ukraine on Wednesday (Mar 24) while Turkey pulled off an impressive 4-2 win at home to the Netherlands, powered by a Burak Yilmaz hat-trick.

Croatia, 2018 runners-up, slumped to a shock 1-0 defeat away to Slovenia, while Belgium continued their remarkable run in qualifiers by coming from behind to beat Wales 3-1 at home.

Ireland ended a seven-game drought by scoring twice away to Serbia but still got beaten 3-2, while Czech Republic routed Estonia 6-2 in the biggest win of the night and Portugal scraped past minnows Azerbaijan 1-0 courtesy of an own goal.

Antoine Griezmann put France in charge of their Group D game against Ukraine to move level with David Trezeguet as his country's fourth all-time top scorer.

Ukraine, who were hammered 7-1 by France in a UEFA Nations League game last October, levelled in the second half through a Presnel Kimpembe own goal.

The visitors held on for the draw despite having no shots on target, although Kimpembe spurned a chance to grab a last-gasp winner and make amends for his error.

The result left Didier Deschamps's side and Ukraine level with Finland and Bosnia in Group D after they drew 2-2.

Turkey have not qualified for the World Cup since finishing third at the 2002 edition but got off to a flying start in their bid to make it to Qatar next year by beating the Netherlands in Group G thanks to a ruthless display from the 35-year-old Yilmaz.

Yilmaz opened the scoring in the 14th minute with a deflected shot, followed by a penalty, while Hakan Calhanoglu grabbed Turkey's third goal early in the second half before goals in quick succession from Davy Klaasen and Luuk de Jong gave the Netherlands hope of a comeback.

Yilmaz emphatically ended those hopes by completing his treble from a free kick.

"That was a beautiful night. I am so proud," said the striker, while Netherlands coach Frank de Boer described the defeat as "terrible".

Belgium got off to a poor start when Harry Wilson gave Wales the lead in the 10th minute in Group E but Kevin de Bruyne and Thorgan Hazard quickly replied to put them in front before a Romelu Lukaku penalty clinched a 20th win in 21 qualifiers for Roberto Martinez's side.