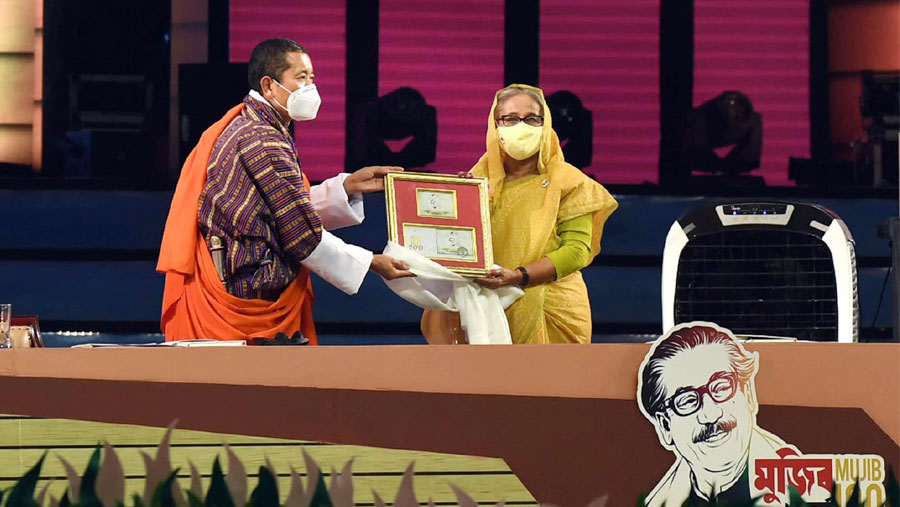 “The improvements are so visible each time I visit the country, especially in the last one decade, the strides Bangladesh has made in its economy is highly commendable,” he said.

The Bhutanese premier was addressing a function at the national parade ground here on the eighth day of the 10-day special programme, marking the birth centenary of Bangabandhu and the golden jubilee of the country’s independence.

Speaking as the guest of honour, Lotay Tshering said despite the Covid-19 pandemic, Bangladesh has been able to retain one of the highest GDP growths in the continent.

Noting that the development forecasts are even more impressive, he said: “We are proud of the progress because strong economy for Bangladesh will be an impetus for Bhutan and the region.”

Terming Bangladesh “his second home”, the Bhutanese premier said he has come to celebrate two very special events – the birth centenary of the Father of the Nation Bangabandhu Sheikh Mujibur Rahman and the 50 years of independence of the country.

“I strongly believe that as a part of humanity, we all have a story to share. Bangladesh has story to share and I am happy to be listening to it, seated next to Her Excellency the Prime Minister (Sheikh Hasina), an inspiring leader and a mother-like figure for me,” he said.

He said such significant occasions uplift the spirit of not just the people of Bangladesh but the entire region at a time when Covid-19 pandemic has claimed many precious lives and disrupted livelihoods of millions around the world.

“Here, I would like to offer my heartfelt prayers to the families who have suffered a great deal,” said Lotay Tshering.

Recalling the bold leadership of Sheikh Hasina, he said: “And even from a distance, I could sense so much care and concern for her people. Bangladesh is truly blessed to have her. I am sure Sheikh Mujibur Rahman is proud of Bangladesh today and of course, his daughter.”

The Bhutanese premier said Prime Minister Sheikh Hasina and her team have managed the pandemic so well despite the overwhelming size and population.

“We are also deeply appreciative of the support extended by the government and the people of Bangladesh during these extraordinary times,” he added.

“I have also come here to pay respect to the daughter who has displayed deep commitments to realise her father’s dream of Shonar Bangla,” Lotay Tshering added.

He said this year is also special as Bhutan has enjoyed 50 years of bilateral ties with Bangladesh and “we shall strive to secure far more success and achievement, as we continue our journey together in the second half of the century”.

Mentioning the Bangladesh’s diplomatic policy – friendship to all, malice to none – introduced by Bangabandhu Sheikh Mujibur Rahman, the Bhutanese prime minister said: “Our king thought peace and harmony is the key to success.”

He expressed gratitude to the government of Bangladesh and its people for the opportunity to be part of this historic event and cordial hospitality.