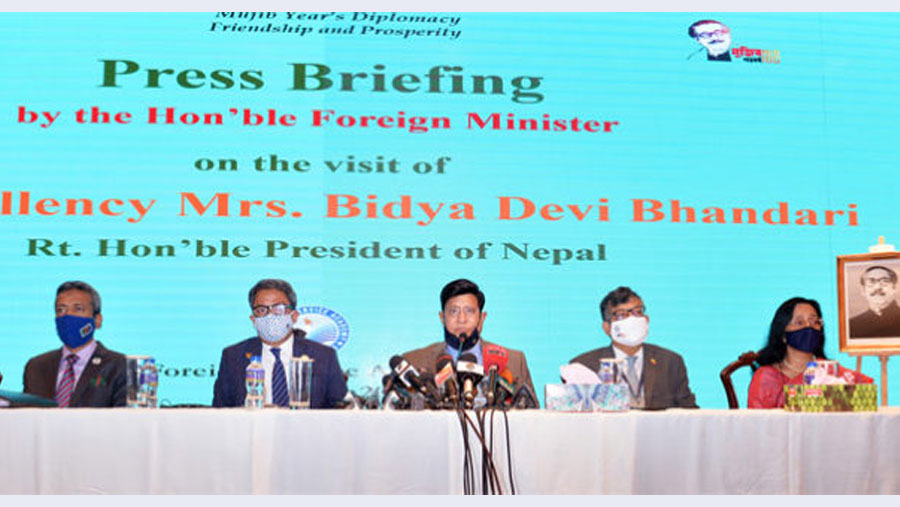 The foreign minister said the meetings of the secretary-level steering committee and the executive committee on power generation and distribution have already been held under a memorandum of understating (MoU) signed between Bangladesh and Nepal in 2018 aiming to enhance cooperation in hydropower.

He said both the parties hope that they will enhance cooperation in hydropower sector in the future.

Momen said Nepalese President Bidya Devi Bhandari arrived in Dhaka on Monday on the occasion of the birth centenary of Father of the Nation Bangabandhu Sheikh Mujibur Rahman and the golden jubilee of the country’s independence.

“During the meeting, she praised Prime Minister Sheikh Hasina, terming her the most inspiring woman leader and role model in the world,” the Bangladesh foreign minister said.

He said the issue of signing the Preferential Trade Agreement (PTA) between Bangladesh and Nepal is at final stage now and once the deal is signed, bilateral trade will increase manifolds.

Momen said during the Nepalese President’s visit to Dhaka, four instruments – MoU on Tourism Cooperation, MoU on Strengthening Sanitary and Phytosanitary (SPS) Cooperation, Cultural Exchange Programme for the year of 2022-2025 and Letter of Exchange on Rohanpur-Sighabad Railway Route – were signed between the two friendly countries.

The foreign minister said: “To implement the BBIN Motor Vehicles Agreement signed among Bangladesh, India, Nepal and Bhutan in 2015, the possibility of including new routes in BBIN along with the existing ones is being examined.”

Mentioning that Bangladesh and India have already agreed to sign the passenger protocol, he said: “We hope that Nepal will give its consent soon to this end.”

Momen said it has been feared that the low-laying Bangladesh would bear the brunt of glacier melting in Nepal’s Himalaya induced by global warning.

In this context, he said, Bangladesh and Nepal agreed to work together in climate change issues at international forums, including the Climate Vulnerable Forum (CVF) and the United Nations.

The foreign minister said Nepal was urged to provide support and cooperation to Bangladesh in repatriation of forcibly displaced Rohingyas to their homes of origins in Myanmar.