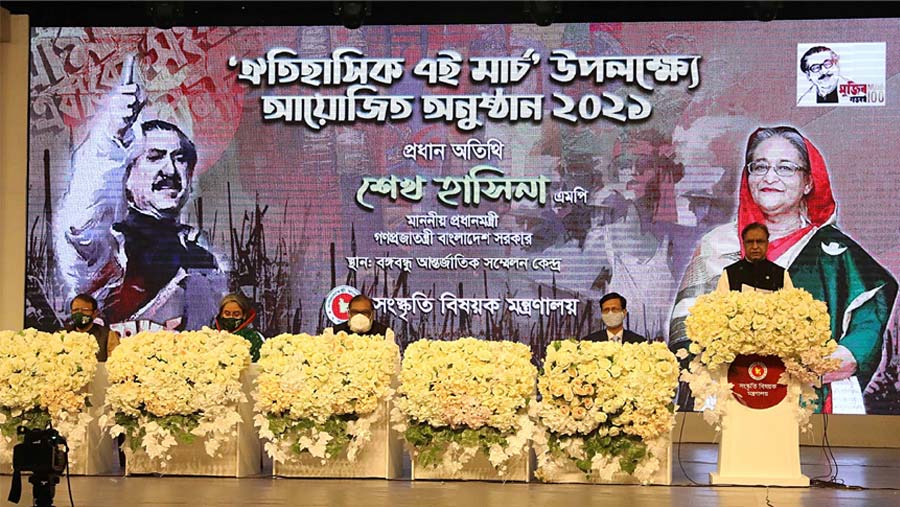 Prime Minister Sheikh Hasina on Sunday said the historic March 7, 1971 speech of Father of the Nation was the actual declaration of the country’s independence as it contained the directives on taking preparation for the Liberation War.

“The most important aspect of the historic March 7 speech was that he (Bangabandhu) had given all the directives regarding taking preparation for a (guerilla) war. If it is thought from this point of view, it can be said that the March 7 speech was the real declaration of the country’s independence,” she said.

The premier was addressing as the chief guest a discussion organized by the Cultural Affairs Ministry at the Bangabandhu International Conference Centre (BICC), joining virtually from her official Ganabhaban residence in the capital in the afternoon, local media reported.

She said that Bangabandhu knew that a guerrilla war would take place and for that he asked the countrymen to be ready with whatever they had to face the enemies.

Sheikh Hasina said that Bangabandhu had even given all the directives on how then East Pakistan, now Bangladesh, would be run.

She said a single Bangalee did not work without the directives issued from Dhanmondi 32. “Even when Yahiya Khan came to Dhaka, any Bangalee cook of the President House didn’t work,” she added.

“The President House was compelled to phone Dhanmondi 32 that the President is not getting cooked foods until you ask the cooks and they have to pass time by eating dried foods.”

At the outset of the programme, the national anthem and the historic March 7, 1971 speech of the Father of the Nation were played.

The PM said that the Father of the Nation in his March 7 speech had instructed the Bangalees to take preparation for the guerilla war as the Pakistanis were taking preparation to carry out an attack on them.

She said that Bangabandhu had taken a strategy that the Pakistanis would first launch attacks on the Bangalees, compelling them to retaliate. He took this strategy mainly to get international support to the Bangalees’ endeavor of liberating the country from the clutches of the Pakistani occupation forces, she added.

The Father of the Nation had taken the war strategy to give the people an independent country even by risking his life, she continued.

As the Pakistani occupation forces launched attacks on the unarmed Bangalees, Sheikh Hasina said, Bangabandhu had started publicizing the declaration of the country’s independence in line with his war strategy.

She said that the strategy of Bangabandhu worked effectively with the pouring of international support in favour of the Bangalees during the Liberation War as the Pakistanis first launched attacks and carried out genocide and inhuman tortures.

The international community had continued their support even after the Pakistani junta took Bangabandhu to Pakistan and sentenced him in a sedition case due to the war strategy taken by Bangabandhu.

“How effective his speech was from view point of a war strategy! And how realistic his every step was! That is very important,” she continued.

The PM said most of the historic speeches which got world recognition were written and prepared previously.

“But Bangabandhu delivered the historic March 7 address from his own mind and my mother had an important role in this regard,” she said.

Sheikh Hasina recalled that some student leaders insisted Bangabandhu at that time on declaring independence, arguing that otherwise the people would be frustrated, she said.

“But just before the rally, my mother told Bangabandhu that many people will say many things, but you don’t need to hear all the words... you will say those words which will come from your mind,” she said.

The PM said the March 7 speech which was once banned in Bangladesh after the assassination of Bangabandhu in 1975, got recognition on the world stage.

“History can’t be erased so easily. The truth can never be suppressed... Today the truth has got exposed. Today this speech received the world recognition,” she said.

Sheikh Hasina said the historic 7th March speech has been translated into every official language of the United Nations at the initiatives of the UNESCO.

The premier said March 7 speech of Bangabandhu has been selected as the greatest speech among all speeches of the 2500 years and also been placed in the UNESCO’s World Documentary Heritage.

Mentioning that the Bangalee nation has stood with keeping their head high as Bangladesh has become a developing nation, Sheikh Hasina said that her government has been working to give the people of the country political, economical and cultural independence.

“We’re advancing and will continue to move ahead… We’ll build ‘Shonar Bangla’ as dreamt by the Father of the Nation,” she asserted.