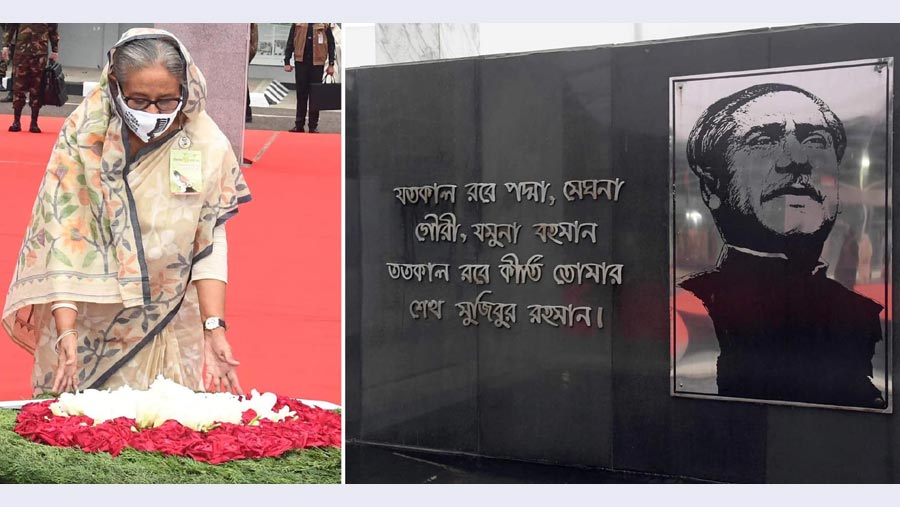 The nation on Sunday observed the historic March 7 commemorating the landmark speech of Father of the Nation Bangabandhu Sheikh Mujibur Rahman which was touted as indirect declaration of the country’s independence in 1971.

The day was observed nationally for the first time this year.

National flag was hoisted atop all public and private buildings in the country and its diplomatic missions on the occasion of the day.

Prime Minister Sheikh Hasina paid rich tributes to Father of the Nation Bangabandhu Sheikh Mujibur Rahman by placing a wreath at his portrait in front of Bangabandhu Memorial Museum at Dhanmondi in the city in the morning.

After placing the wreath, she stood in solemn silence for some time as a mark of profound respect to the memory of Bangabandhu, the architect of the independence.

Sheikh Rehana, younger daughter of Bangabandhu, accompanied her sister and Prime Minister Sheikh Hasina while a munajat was offered praying peace of the departed souls of the Aug 15, 1975 martyrs.

After the departure of the premier from the premises of Bangabandhu Bhaban, Bangladesh Awami League General Secretary and Road Transport and Bridges Minister Obaidul Quader along with party leaders placed a wreath at the portrait of Bangabandhu on behalf of Awami League.

Special prayers were held at all mosques across the country seeking eternal peace of the departed souls of Bangabandhu and 1971 Liberation War martyrs.

On Mar 7 in 1971, Bangabandhu delivered a momentous speech at the then Race Course Maidan, now Suhrawardy Udyan in Dhaka, effectively declaring the War of Independence, which speech brought the country’s independence successfully.

This year observance of the day was more significant as the country is going to celebrate the golden jubilee of the country’s independence on Mar 26 next while ‘Mujib Year’, the yearlong celebration of Bangabandhu’s birth centenary is also going on.

The landmark fiery speech of Bangabandhu inspired the Bengalees to prepare for the War of Liberation.

On Oct 30 in 2017, the UNESCO recognised the historic speech as part of the world’s documentary heritage.

It has been included in the Memory of the World International Register, a list of world’s important documentary heritage maintained by the United Nations Educational, Scientific and Cultural Organisation (UNESCO).

On Mar 7, Bangabandhu in his historic speech directed the freedom-loving Bangalees for waging a decisive struggle against the Pakistani occupation forces.

In the 19-minute extempore speech from 4.23 p.m. before millions of people of former East Pakistan, Bangabandhu in unequivocal term said, “We spilled our blood... we are ready to shed more blood, the people of the country shall be freed, Inshallah!”

During his deliberations amid thunderous slogans and applause, he also made a fervent appeal to the roaring people from all walks of life to take preparations for armed struggle against the tyranny, exploitation, subjugation and deprivation by Pakistani military junta with whatever they possessed and transforming every house into a fortress.

The people were overwhelmed and imbued with the spirit of Bangabandhu’s unparalleled speech of independence regarded only as comparable to the Gettysburg Speech of slain US President Abraham Lincoln.

The vigorous speech inspired people of all walks of life to prepare for the war, which eventually began after the Pakistani regime on the black night of Mar 25 launched on the unarmed Bangalees the worst genocides in history for the next nine months.

Bangabandhu’s March 7 speech has been selected as one of the most rousing and inspirational wartime speeches in the last 2,500 years. The dynamic speech had changed the course of the country’s history.

The tantalizing speech literally had a mesmerizing and sparkling effect on the entire population of this soil and they became united under his capable and farsighted leadership to bravely fight for liberating the motherland from the clutches of the Pakistani occupation forces.

Although people from all walks of life irrespective of political and religious beliefs were united for the cause and began to take all out preparations for a bloody war, they waited till the crackdown of the Pakistani occupation forces on the sleeping Bangalees on the night of Mar 25, defamed as the “Operation Searchlight”.

As soon as the Pakistani occupation forces started genocide, Bangabandhu declared independence of the motherland instructing the people to put up strong resistance and fight against them till the liberation is achieved.

At the instruction of Bangabandhu, the brave nation fought successfully the nine-month-old war of liberation and ultimately liberated Bangladesh from the clutches of the Pakistani occupation forces on Dec 16, 1971 with the assistance of the allied Indian forces.