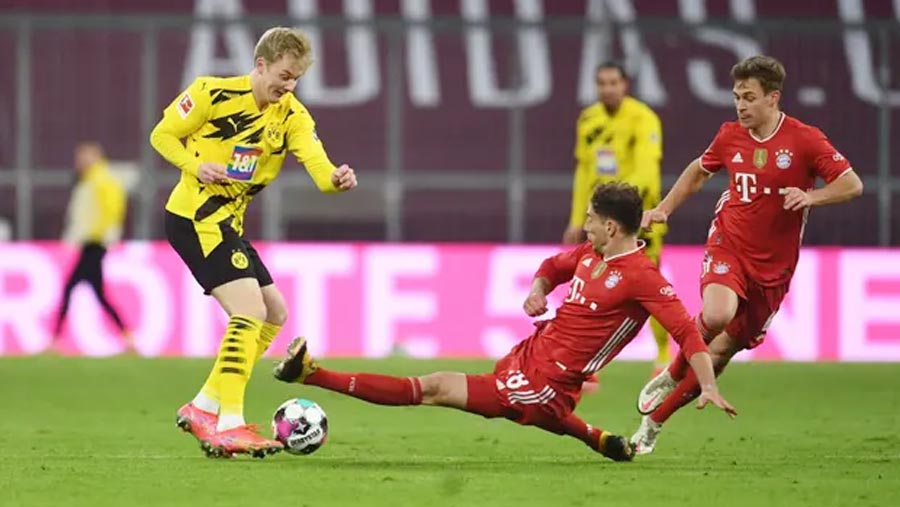 A Leon Goretzka strike and a Robert Lewandowski hat-trick cancelled out two early Erling Haaland goals to give Bayern Munich a 4-2 win over Borussia Dortmund in Der Klassiker – moving the Bavarians back to the Bundesliga summit.

Haaland drove Dortmund ahead from 20 yards after just 74 seconds and then turned home Thorgan Hazard's cut-back.

But Lewandowski steered in Leroy Sane's cross and levelled from the spot after Mahmoud Dahoud fouled Kingsley Coman.

Leon Goretzka drilled Bayern ahead late on before Lewandowski's third confirmed a return to the top of the Bundesliga.

Victory moved Hansi Flick's reigning champions two points clear of second-placed RB Leipzig, who had briefly climbed above them by winning at Freiburg earlier on Saturday.

Dortmund, meanwhile, drop a place to sixth, four points off the Champions League places, their woes compounded by a knock to Haaland that forced the Norway striker off in the second half.

He joins England winger Jadon Sancho on the treatment table, the England winger absent with a thigh injury, and Dortmund will be desperate for both to be fit by Tuesday as they bid to protect a 3-2 first-leg advantage against Sevilla in the Champions League last 16.