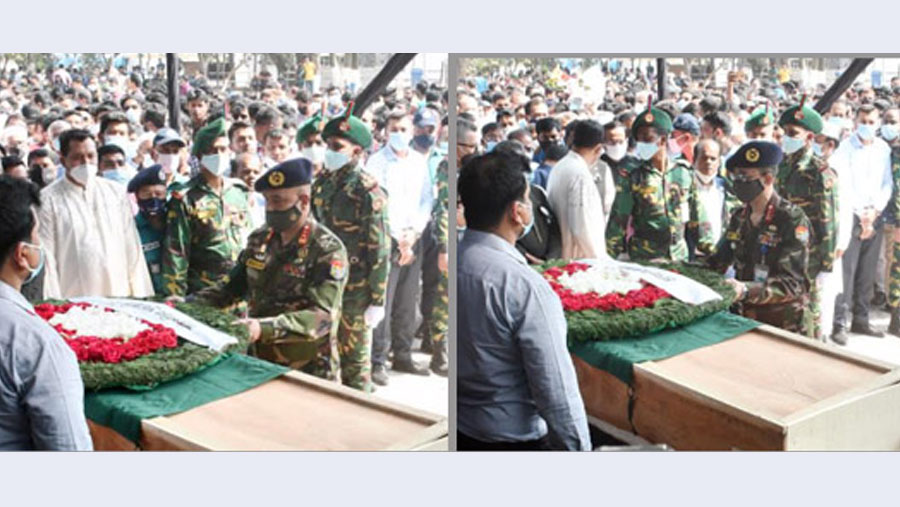 Prime Minister’s Political Adviser HT Imam, who breathed his last in the early hours of Thursday (Mar 4) at the age of 82, was laid to his eternal rest with state honour at the Banani Graveyard in the city on Thursday afternoon. He was buried following his second Namaz-e-Janaza at Azad Masjid in Gulshan after Asr prayers while a contingent of policemen offered him the guard of honour before burial, local media reported.

Earlier, Imam’s body was taken to his ancestral home at Ullapara upazila in Sirajganj by a helicopter while his first Namaz-e-Janaza was held at Ullapara Akbar Ali Government College ground there at 12 noon.

Before the Janaza, people from all strata, including leaders and activists of Ullapara Awami League, Jubo League, Chhatra League, Swechchhasebak League, paid their rich tributes to HT Imam by placing floral wreaths on his coffin there. Then his body was brought back to the capital by the same copter and kept at the Central Shaheed Minar from 1.30 p.m. to 3.30 p.m. to allow people from all walks of life to pay their homage and have last glimpse on the cabinet secretary of the Mujibnagar Government during the country’s Liberation War in 1971.

On behalf of President Md. Abdul Hamid and Prime Minister Sheikh Hasina, their military secretaries paid tributes to HT Imam by placing wreaths on his coffin on the Shaheed Minar premises.

HT Imam breathed his last around 1.15 a.m. at the Combined Military Hospital (CMH), Dhaka where he was being treated for various age-related complications, including kidney disease.

Hossain Toufique Imam, popularly known as HT Imam, joined the then Pakistan Civil service in 1962 and served the Mujibnagar government as the cabinet secretary during the country’s Liberation War in 1971.