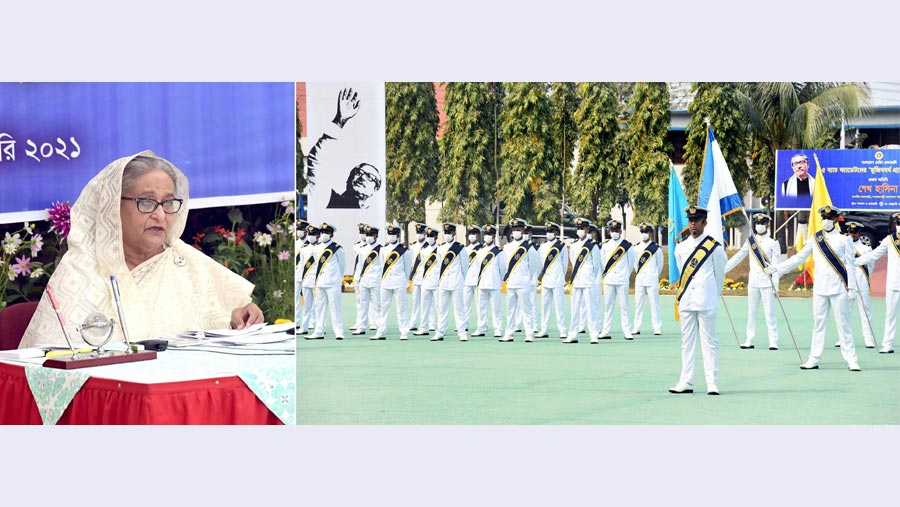 Prime Minister Sheikh Hasina today urged the marine academy graduates to work with honesty, sincerity and skillfulness to brighten the country’s image at home and abroad.

“You (graduates) are going to step into a new life where you have to uphold the country’s reputation... your main responsibility is to perform your own duty with honesty, skillfulness and sincerity so that Bangladesh’s image is brightened at home and abroad,” she said.

The premier was addressing the Mujib Borsha Graduation Ceremony of the 55 Batch of Bangladesh Marine Academy in Chattogram, virtually joining from her official residence Ganabhaban, local media reported.

She said the highest education and training is needed to compete with this competitive world and the government is creating opportunities to this end.

Referring to different initiatives of the incumbent government to expand scope of education, Sheikh Hasina said they have established Bangabandhu Sheikh Mujibur Rahman Maritime University in 2013 for higher education in shipping and upgraded 3-year pass course to 4-year honors course along with introduction of masters for maritime science degree.

She said the government wants to pull the country ahead following the vision and philosophy of Father of the Nation.

Bangabandhu Sheikh Mujibur Rahman, returning home in 1972 from the captivity in Pakistan, had given a plan and guidelines along with formulation of the Constitution and necessary laws as well as acts for how the independent Bangladesh would be governed, she added.

A total of 192 cadets of Bangladesh Marine Academy under the 55 batch became graduates today.

The PM, over the coronavirus situation, reiterated her call to the country’s people to maintain health guidelines even after receiving the Covid-19 vaccine.

“No one should think that all the problems are gone after taking the Covid-19 inoculation. You’ll have to wear facemask always and follow all the health guidelines to keep yourselves protected. And I hope everyone will keep attention to it,” she continued.

Sheikh Hasina went on saying though the government is implementing the Covid-19 vaccination programme, but all the people should follow all the health protection guidelines, including using face-masks and keeping their hands clean regularly, to keep themselves protected from the deadly virus.

She said her government has been making all-out efforts to ensure all sorts of health services for the people of Bangladesh and in this connection it has already taken proper measures.

About the Bangladesh Marine Academy, the premier said Bangabandhu Sheikh Mujibur Rahman returning home in 1972 established the academy and adopted “development of marine academy 1973” project with the British technical assistance.

In the last 10 years, she said, the marine academy has digitalized its academic activities from the traditional system due to the initiatives of the government.

To upgrade the nautical training of the academy, “Navigation Simulator” has been installed in 2019 while process of installing “Engine Control Simulator” is going on for developed marine engineering training, she added.

In addition, the academy has attained acknowledgement of UK’s Merchant Navy Training Board while the certification of UK Maritime and Coastguard Agency is under way, said the premier.

She said singing of Memorandum of Understanding (MoUs) with Warsash School of Maritime Science and Engineering of UK’s Southampton Solent University and Maritime Academy of Asia and Pacific of Philippine are on the final stage which would help it to attain more credibility globally.