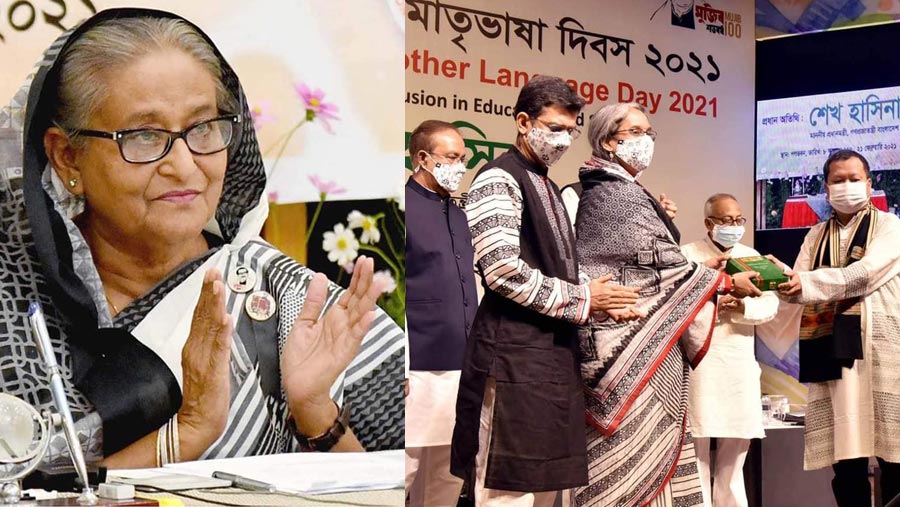 Prime Minister Sheikh Hasina on Sunday (Feb 21) said her government has been working to ensure that no language across the world would face extinction.

“We have established the International Mother Language Institute so that other languages in the world can be preserved. We have taken the measure as no language will face extinction and their existence can come out,” she said.

Mentioning that a language museum has been established in the IMLI, she said that the samples of languages currently existing in the world alongside those who have already faced extinction have been preserved in the museum.

The premier stressed the need for collecting history of the languages as the people who want to study or conduct research on those can easily do it.

She added that the International Mother Language Institute has brought good rapport for us as it has done great works internationally.

The PM also thanked the UNESCO (United Nations Educational, Scientific and Cultural Organization) for its recognition to International Mother Language Institute as a second grade organization.

In this connection, she said her government has been publishing the text books of the ethnic minority groups in their native languages and distributing those free of cost as they can learn and speak in their own languages.

Director General of the Bangla Academy Poet Habibullah Sirajee read out an article titled “Bangabandhu in Language Movement” on the occasion.

National Professor Dr Rafiqul Islam and Mothura Bikash Tripura have been conferred with the International Mother Language National Award, 2021 while Uzbekistani researcher Islaimov Gulom Mirzaevich and The Activismo Lenguan, a Bolivia-based organization with the International Mother language Award, 2021, for their contributions to flourishing language.

On behalf of the Prime Minister, the education minister handed over the awards.

One minute silence was observed as a mark of respect to the memories of the Language Heroes while the immortal song on Amar Ekushey – “Amar Bhaiyer Rakte Rangano Ekushey February” – was also played at the outset of the function.

Mentioning that the country’s independence had resulted from the path of Language Movement and Father of the Nation Banganandhu Sheikh Mujibur Rahman led the movements, Sheikh Hasina said that many knowledgeable persons and intellectuals have opposed that Bangabandhu had started the language movement.

The PM said the intellectuals in their arguments said that how Bangabandu did wage for the Language Movement as he was in jail at that time.

She questioned the noted personalities why Bangabandhu was in jail at that time saying that the Father of the Nation had been arrested time and again as he had started the Language Movement and conducted huge campaign for it.

The PM went on saying that one can now easily know the real history of the Language Movement by reading the Pakistani intelligence branch reports from 1948 to 1971 which was totally made against Bangabandhu.

Referring to the report, she said, “Truth can never be suppressed.”

The premier said many have criticized her when she first said Bangabandhu had initiated or led the Language Movement on the basis of the intelligence branch reports.

She said after assuming office in 1996, she has collected the reports and are now publishing those as everyone can know the real history of the Language Movement and the Liberation War, adding, “Many truths of the history are coming out from the intelligence report.”

The PM said that she had given speeches many times about the contribution of Bangabandhu in the Language Movement as people were denying his contribution.

“Now I think, I need not to talk about this. All people can now know it more from the intelligence branch reports,” she opined.

Sheikh Hasina also thanked Poet Habibullah Sirajee for presenting a rich and informative article titled “Bangabandhu in Language Movement” from which she said the people can know the history of Language Movement.

At the end of her speech, the PM reiterated her commitment to establish a developed and prosperous “Shonar Bangladesh” free from hunger and poverty as envisioned by the Father of the Nation.