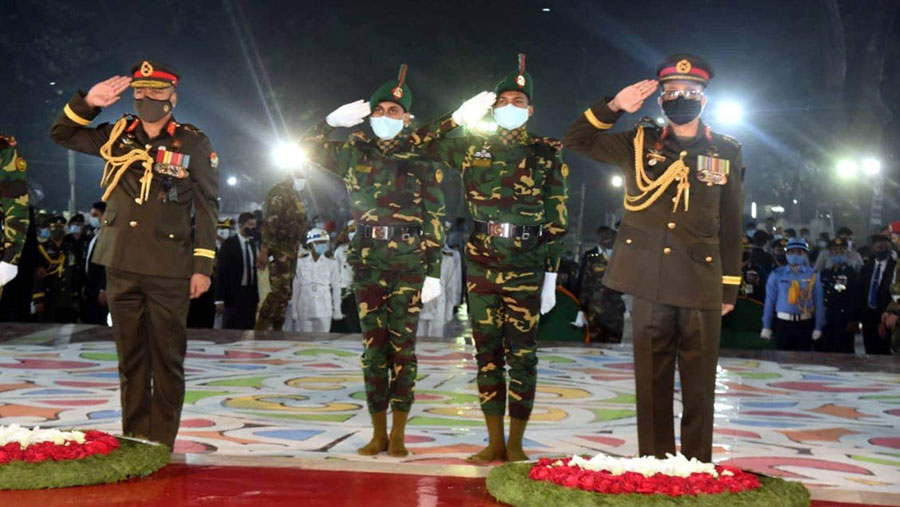 The supreme sacrifice of the language heroes on this day 69 years back is being remembered as people are paying glowing tributes to 1952 language martyrs by placing wreaths at the altar of the Central Shaheed Minar at midnight maintaining health guidelines.

Military secretaries to the President and the Prime Minister placed wreaths on their behalf at the Central Shaheed Minar at one minute past zero hours.

The immortal song on Amar Ekushey – “Amar Bhaiyer Rakte Rangano Ekushey February” – was playing on the loudspeaker on the occasion.

People representing different political and other organisations then thronged the altar of the Central Shaheed Minar to offer their floral tributes maintaining health guidelines.

Later on, the Shaheed Minar was opened to the public when hundreds of people from all walks of life walked barefoot to it with flowers in hands and humming “Amar Bhaiyer Rokte Rangano Ekushey February” to recall the supreme sacrifice of the language heroes on this day in 1952.

The day is also being observed around the world as the UNESCO recognised the Feb 21 as the International Mother Language Day on Nov 17, 1999.

The government took extensive programmes to observe the ‘Shaheed Dibash’ and the International Mother Language Day in a befitting manner.

Tight security was enforced around the main altar of the Shaheed Minar, its adjoining areas and Azimpur graveyard of the language martyrs.

Different political-social-cultural-professional organisations, including the ruling Awami League, also have taken various programmes such as seminars and cultural functions, to observe the Amar (immortal) Ekushey and International Mother Language Day in a befitting manner.

The Cultural Affairs Ministry has drawn up an elaborate programme to observe the ‘Shaheed Dibash’ (Language Martyrs Day) and the International Mother Language Day-2021 with solemn dignity.

Bangabandhu’s special contribution to the language movement will be presented in various programmes on Martyrs’ Day and International Mother Language Day in line with the birth centenary of Father of the Nation Bangabandhu Sheikh Mujibur Rahman,

National flags will be kept half-mast in a proper manner having accurate size at all the government, semi-government, autonomous and private organisations and educational institutions.

Offering Fateha and Qurankhwani will be held at Azimpur graveyard and special prayers will be arranged at all worship places across the country seeking eternal peace of language martyrs.

The Awami League has drawn up elaborate programmes to observe the Amar Ekushey and the International Mother Language Day in a befitting manner.

Other programmes include wearing of black badges at 7 a.m. and later bringing out Provat Feri from south gate of New Market as a mark of respect to the Language Movement martyrs.

To mark the day, a discussion will be held at the AL’s Bangabandhu Avenue central office at 4 p.m. on Feb 22. Awami League President and Prime Minister Sheikh Hasina will chair the discussion through a videoconferencing from her official Ganabhaban residence.

Considering the prevailing Covid-19 situation and following the proper hygiene rules, a maximum of 5 delegates from each organization and a maximum of 2 persons at the individual level are laying wreaths at the Shaheed Minar.

Basin and liquid soaps will be provided for hand washing purpose at all entrances of Shaheed Minar.

No one will be allowed to enter the Shaheed Minar premises without wearing a mask.

Key city points and crossings and intersections were decorated with festoons with inscription of Bangla letters.