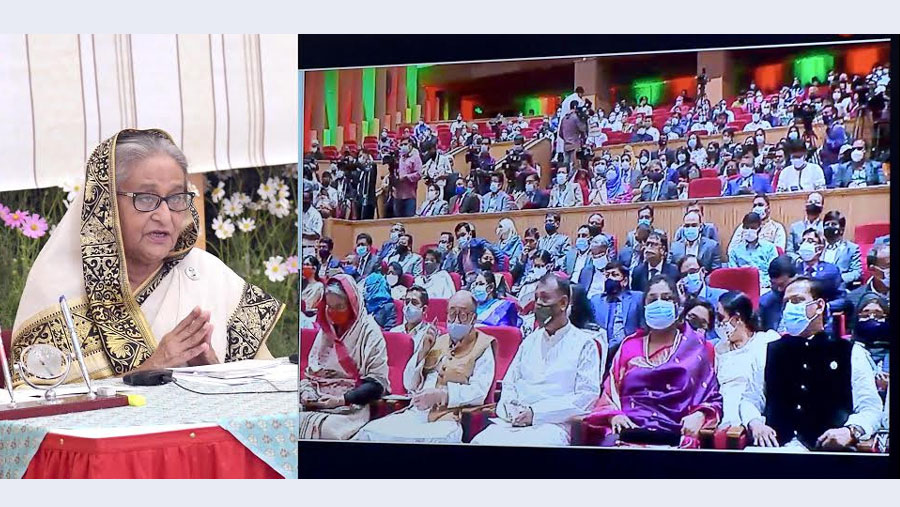 Reiterating her vow for a dignified Bangladesh, Prime Minister Sheikh Hasina today said the Language Movement has paved the ways of the country’s independence to all achievements.

“Bangali nation has achieved all things through struggles at each stage of life and anyone didn’t offer those to us cordially,” she said.

Those people who have interest to know the Language Movement to independence as well as all achievements in details, she requested them to go through the Secret Documents of Intelligence Branch (IB) on Father of the Nation Bangabandhu Sheikh Mujibur Rahman.

“I have collected all the secret reports (1948-71) prepared by the Pakistani IB against Bangabandhu, which is being published by me in 14 volumes. Meanwhile, seven volumes have been printed and there you can know about all the achievements -from Language Movement to Independence,” she said.

The premier went on saying, you don’t need to read all volumes, rather you will find much information in the first four volumes.

Regarding the dignified Bangladesh, she said “We are Bangali, Bangla our country and this Bangladesh will move ahead with head high and honor in the world arena. Without seeking help to anyone, we will step forward by own with self-esteem.”

This year Ekushey Padak, the second highest civilian award in Bangladesh, was delivered among 21 eminent persons on the eve of Amar Ekushey and the International Mother Language Day.

On behalf of the Prime Minister, Liberation Affairs Minister A K M Mozammel Haque handed over the awards among the winners. With State Minister for Cultural Affairs K M Khalid, MP, in the chair, Secretary of the ministry M Badrul Arefin delivered welcome address. Cabinet Secretary Khandker Anwarul Islam conducted the award-giving ceremony and read out the citations of the awardees, organized by the Ministry of Cultural Affairs.

The Ekushey Padak was introduced in memory of the martyrs of the Language Movement of 1952.

The award is given to individuals and organizations in recognition of contributions to a number of fields including the War of Liberation, literature, music, education, journalism, poverty reduction, research, and visual arts.

The awardees are: Motahar Hossain Talukdar (posthumous), Shamsul Haque (posthumous) and Advocate Afsar Uddin Ahmed (posthumous) for their roles in the Language Movement.