Bangladesh history must be made known down through generations: PM 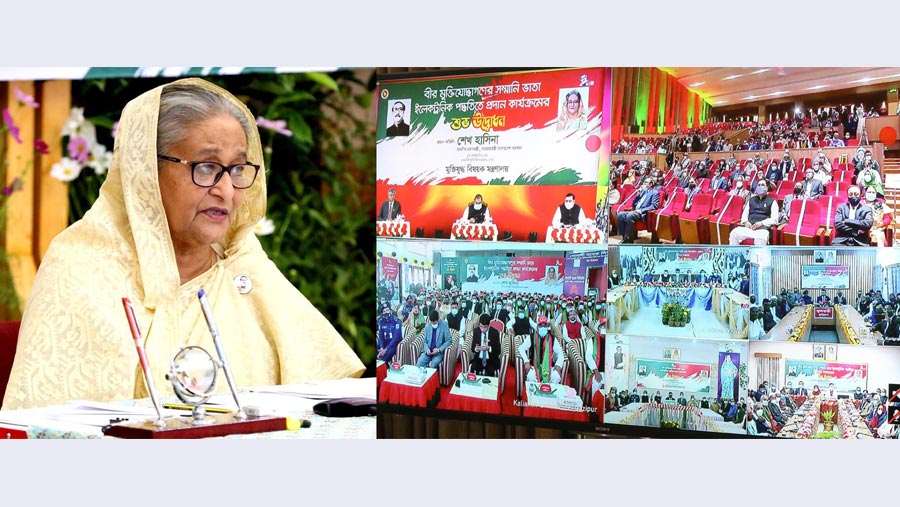 Laying emphasis on preserving the memories of the war of liberation and martyrs, Prime Minister Sheikh Hasina on Monday (Feb 15) said generation after generation should know the country’s real history, evolution and achievement.

“Bangladesh is now an independent nation which once upon a time was a deprived, exploited and repressed nation. But, it has stood up with high head before the world and generation to generation should know how we got this achievement,” she said.

The PM said the government has taken initiatives to construct museums and preserve evidence and memories of the war of liberation so people could know the real history visiting these places.

“We want the next generation to see and know the evidence and memories of the war of liberation, and the government is tirelessly working to this end,” she added. Liberation war affairs minister A K M Mozammel Haque and secretary Tapan Kanti Ghosh also spoke on the occasion.

Prime Minister’s Office (PMO) Secretary Md. Tofazzel Hossain Miah moderated the event. An audio-visual presentation on the war of liberation and freedom fighters was screened at the outset of the ceremony.

Sheikh Hasina said the government has taken massive initiative to preserve the memories of Suhrawardy Udyan, as Father of the Nation Bangabandhu Sheikh Mujibur Rahman had given March 7 speech here. Also Bangabandhu, at the reception meeting here after his home-coming on Jan 10, had delivered directives on how the independent Bangladesh would run, she added.

She went on saying the then Indian Prime Minister Indira Gandhi who helped most in the War of Liberation delivered speech at Suhrawardy Udyan and Silver jubilee of country’s independent was also celebrated here in the tenure of Awami League in 1996 where Palestinian President Yasser Arafat, South African President Nelson Mandela and Turkey’s President Sleyman Demirel attended and installed “Shikha Chirantan”.

Also referring to the surrender of Pakistani occupation forces to the Mitra Bahini (allied forces) at Suhrawardy Udyan, Sheikh Hasina said the government is implementing different activities including an underground museum here to preserve the memories and history so that people can know everything by visiting this place.

The PM said initiatives have also been taken to preserve the places of war, mass killings, burial places of martyrs and others alongside constructing Muktijoddha Complex across the country to let the people and next generation know the history of the country’s War of Liberation.

In the Muktijoddha Complex in every upazila, there will be a small museum to preserve the materials related to the Liberation War, she added.

She requested the freedom fighters to tell their heroic stories of the War of Liberation to the children.

Briefly elaborating various programmes of the government for the welfare of the valiant war heroes of the country, the premier said the government is providing accommodation facilities for the freedom fighters, who are homeless.

“As long as I’m there in the government, it will never happen that freedom fighters have no home and address, and they’re spending their days in misery,” she said.

Sheikh Hasina also urged the rich people to extend support to the freedom fighters if anyone stays in hardship, saying that you people (rich) have got the chance to be wealthier as they (freedom fighters) have made the country independent.

The premier also mentioned the government will provide a livable place for everyone besides ensuring their livelihood in the Mujib Borsha.

Each house would be illuminated with electricity, and a hunger-poverty free and non-communal Shonar Bangla as dreamt by the Father of the Nation would be materialized, she added.