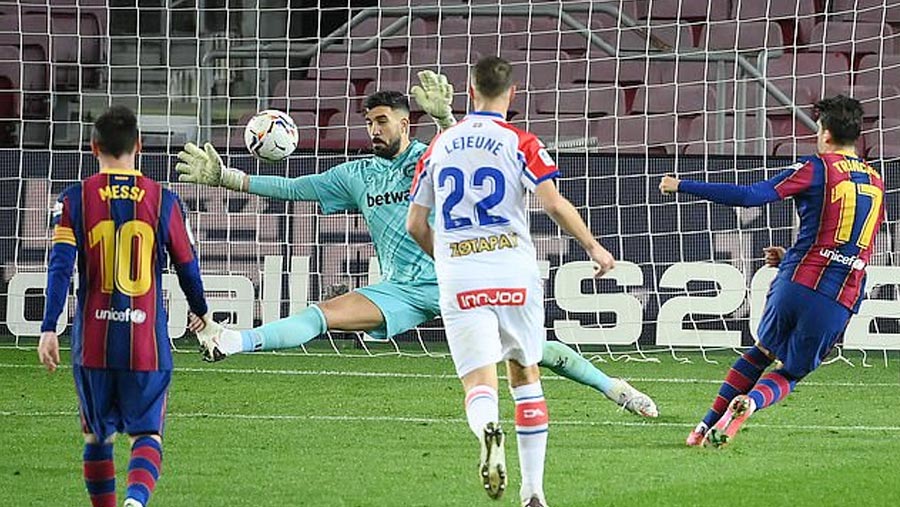 F.C. Barcelona scored another win in La Liga on Saturday (Feb 13), bouncing back from the midweek loss in the Copa del Rey to Sevilla to beat Deportivo Alaves 5-1. Lionel Messi was the star of the show with an incredible performance that included two goals, while Francisco Trincao also scored twice.

Trincao opened the scoring from a pass by Ilaix Moriba – both players were making their first La Liga starts – and Messi doubled the lead via the inside of the post from outside the box.

Trincao scored again after Messi's shot was saved and then the Argentine netted an excellent 25-yard strike before Junior Firpo's close-range fifth.

Messi and Trincao's doubles both came on landmarks days.

Messi, 33, was making his 505th La Liga appearance, equalling Xavi's club record. Trincao, 21, was making the first La Liga start of his career – although he has been a regular off the bench and in cups this season.

Both players had goals disallowed for offside, with Messi's ruled out by the video assistant referee for an exceptionally close call on Antoine Griezmann.

Barcelona move up to second with the victory, albeit eight points behind leaders Atletico Madrid.

Atletico snatch a 2-1 victory at Granada to get back to winning ways.

Meanwhile, Sevilla were made to suffer by basement club Huesca, but thanks to the heroics of goalkeeper Bono, they held on for a 1-0 home win, their ninth consecutive victory in all competitions.

Munir El Haddadi headed home a cross from Oliver Torres to break the deadlock for the hosts in the 57th minute but it took two outstanding saves from Bono to preserve their advantage.

The Moroccan first made a jaw-dropping save to keep out a header by Huesca forward Rafa Mir from point-blank range, while in the 89th minute he parried an effort from Sergio Gomez and then got up to prevent Mir netting on the rebound.

Elsewhere, Eibar and Real Valladolid drew 1-1 in a battle at the bottom of the table.