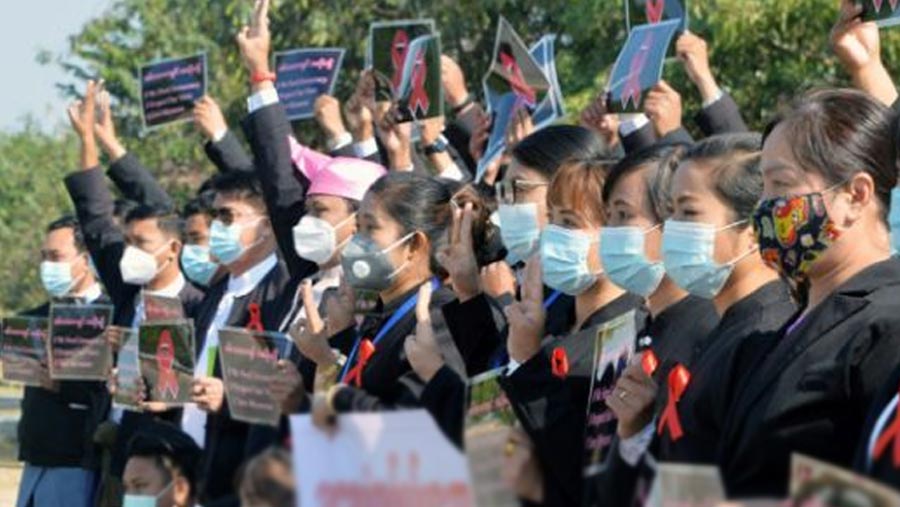 Myanmar’s military tightened their post-coup grip on power, stepping up a campaign of intimidation against the ousted civilian leadership while pushing harsher tactics as a fifth consecutive day of nationwide demonstrations began on Wednesday (Feb 10).

Soldiers raided and ransacked the headquarters of detained leader Aung San Suu Kyi’s party after dark on Tuesday, after police shot water cannon, tear gas and rubber bullets in a sudden escalation of force against the protests sweeping the country.

A doctor in Naypyidaw also confirmed the use of live rounds that left two people critically injured, but footage showed protesters the capital were undeterred, returning to a blockade on a major highway on Wednesday morning.

The United States, which has led international condemnation of the army takeover, on Tuesday renewed its call for freedom of expression in Myanmar – and for the generals to step down.

State media claimed that the crowd had used “obscene language” and thrown objects at police, injuring four officers, in its first direct mention of the street protests since they began on the weekend.

“Therefore, the police members dispersed in accordance with the methods and laws,” the state-run Global New Light of Myanmar newspaper reported, without mentioning other police confrontations elsewhere in the country.

Hundreds of protesters had returned to the streets of Yangon on Wednesday morning, where the day before a large crowd faced off against water cannon and a phalanx of riot police near Suu Kyi’s residence.

Though there were no reported clashes with authorities in the mall on Tuesday, university student Khin Nyein Wai said she was still scared.

“I still came out as I do not like the military dictatorship,” she told AFP news agency . “This is for our future.”