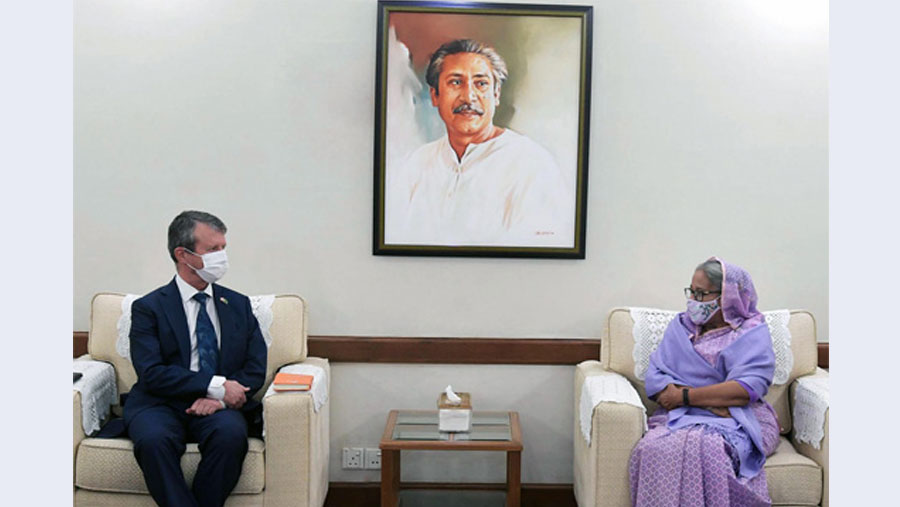 “Bangladesh is located in an important geographical location. It will be possible to have access to the market of the South Asia and Southeast Asia if investments are made in Bangladesh,” she said when Ambassador of Norway Espen Rikter-Svendsen paid a courtesy call to her at her Ganabhaban residence in the morning. PM’s Assistant Press Secretary MM Emrul Kayas briefed media after the meeting.

The PM urged Norway to make investments in the country’s special economic zones, particularly in the ICT and environment friendly jute sectors, saying that a conducive environment for making business is now prevailing in Bangladesh.

Sheikh Hasina expressed her gratitude to Norway as it had extended supports to Father of the Nation Bangabandhu Sheikh Mujibur Rahman during the War of Liberation in 1971 and in rebuilding the country after the war.

As the Norwegian envoy said his country is assisting Bangladesh’s ship recycling industry, the premier said her government has been extending all out supports to this sector.

She informed the envoy that Bangladesh started nationwide vaccination campaign against the Covid-19.

Espen Rikter-Svendsen said his country is one of those who first recognised Bangladesh as an independent state immediately after the Liberation War.

Mentioning that Norway has been assisting Bangladesh since its emergence as an independent nation, he said that his country is one of the largest development partners of Bangladesh.

Later, High Commissioner of Malaysia Haznah Md. Hashim paid a courtesy call on the premier at her official residence.

The PM said Bangladesh needs LNG in the special economic zones being built across the country while the Malaysian envoy expressed her country’s desire to export LNG to Bangladesh.

The envoy hoped that the signing of PTA (Preferential Trade Agreement) between the countries would be possible soon.

She assured Bangladesh of continuing its support in solving the Rohingya issue, saying that they are always in favour of Bangladesh regarding the matter.

The premier told the envoy that Rohingyas have started leaving Cox’s Bazar willingly for Bhashan Char.

The Malaysian envoy expressed her country’s willingness to work jointly in education and shipping industry sectors.

Sheikh Hasina said her government has been working tirelessly to give every homeless and landless person a home marking the Golden Jubilee of Bangladesh’s independence and birth centenary of the Father of the Nation.

The envoy greeted the Bangladesh Prime Minister on behalf of her country’s premier while Sheikh Hasina also greeted her Malaysian counterpart.