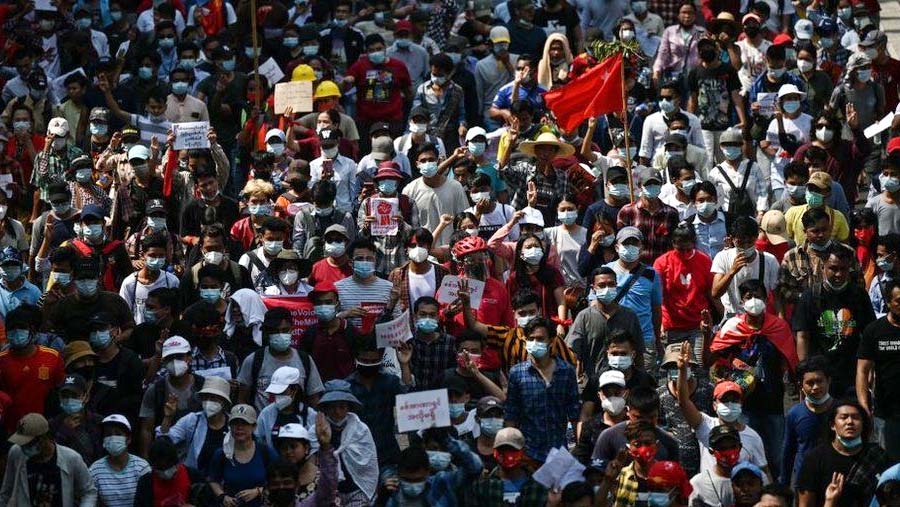 Thousands rallied against the Myanmar coup in Yangon Sunday (Feb 7), as an internet blackout failed to quash outrage over the military’s power grab from elected leader Aung San Suu Kyi.

Tens of thousands of people have protested for a second day in Myanmar's main city, Yangon, as an internet shutdown imposed by the military fails to stop growing anti-coup rallies.

"We don't want military dictatorship," the crowds chanted. Many held pictures of detained leader Aung San Suu Kyi and wore red, the colour of her party.

She has not been seen since the army overthrew her government last Monday.

Demonstrations were also reported in the cities of Mawlamine and Mandalay.

Some images of the protests have been posted online despite the internet blackout imposed on Saturday, which came after the military blocked access to Facebook, Twitter and Instagram to stop people mobilising. Phone services have also been disrupted.

In Yangon, demonstrators held red balloons, while cars and buses slowed to sound their horns in support. Many flashed the three-finger salute, which has become a symbol of defiance against authoritarianism in the region.

"Respect our vote," read one banner, in reference to the National League for Democracy Party's (NLD), landslide win in November's election.

So far the military authorities, known for their violent repression tactics, are not stopping this show of mass defiance, BBC South East Asia correspondent Jonathan Head reports. But everyone assumes they will try to before long, he says.

Ms Suu Kyi and senior leaders of her National League for Democracy Party (NLD), including President Win Myint, have been under house arrest since the army took control of government and declared a year-long state of emergency.

Police trucks and officers in riot gear were stationed on the streets near Yangon University on Sunday, but there were no immediate reports of violence.

The day's protests were the biggest since the so-called Saffron Revolution in 2007, when thousands of the country's monks rose up against the military regime, Reuters news agency reports.

The military authorities have not commented. They are hunkered down in the capital, Nay Pyi Daw, and have so far avoided direct engagement with the protesters.

Human rights groups have criticised the internet shutdown, calling for connectivity to be restored. Amnesty International said the blackout was "heinous and reckless" and warned it could put the people at risk of human rights violations.

The United Nations special rapporteur on Myanmar, Thomas Andrews, said: "The generals are now attempting to paralyse the citizen movement of resistance - and keep the outside world in the dark - by cutting virtually all internet access."

The coup took place as a new session of parliament was set to open, following the November election in which the NLD party won 80% of parliamentary seats.

Many Burmese watched the events unfold in real time on Facebook, which is the country's primary source of information and news.