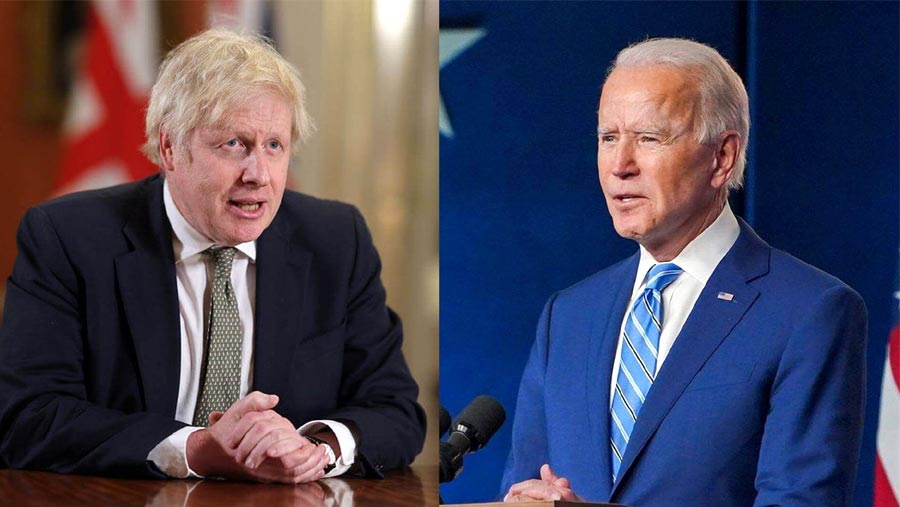 Boris Johnson and Joe Biden on Saturday (Jan 23) vowed to deepen ties and cooperate on tackling climate change in their first conversation since the US president’s inauguration, the British Prime Minister’s office said.

Johnson congratulated Biden on his inauguration and “the two leaders looked forward to deepening the close alliance between our nations”, said the statement from Downing Street.

British newspapers reported that Johnson was the first European leader to receive a call from Biden, who earlier spoke to Canadian and Mexican counterparts.

The right-wing Sunday Telegraph reported that Johnson was the first leader outside North America to speak to Biden “after his scheduled call was brought forward two days in what will be seen as a major boost for the special relationship between the UK and US.”

Biden on Friday spoke to Canadian Prime Minister Justin Trudeau in his first call to a foreign leader.

Johnson tweeted a picture of himself in shirt-sleeves laughing as he spoke on the phone. “Great to speak to President @JoeBiden this evening,” he wrote.

The conversation appeared aimed at warming frosty relations after Biden in 2019 described Johnson as a “physical and emotional clone” of Donald Trump, his predecessor as US president.

Biden has also been critical of Johnson’s Brexit policy, but the Downing Street statement said the leaders “discussed the benefits of a potential free trade deal between our two countries”.

Johnson said he intended to resolve current trade issues “as soon as possible”.

Biden, who has Irish roots, had warned ahead of his election that if Brexit damaged the 1998 Good Friday Agreement he would not consent to a trade deal. That agreement ended 30 years of violence in Northern Ireland.

Johnson praised Biden for swiftly reversing policy decisions made by his predecessor.

He “warmly welcomed” Biden’s decision to put the United States back into the Paris climate accord and rejoin the World Health Organization. The prime minister also praised Biden’s commitment to reach net zero emissions by 2050.

The leaders said they hoped to meet soon and would work together on the United Nations’ global climate change summit to be held in Scotland in November, said the statement.

The leaders “re-committed to the NATO alliance” and “shared values in promoting human rights and protecting democracy”, it added. Trump was highly critical of the transatlantic alliance.

The leaders also agreed on the “significant challenges facing the world during the pandemic”. The United States has the largest number of cases and deaths in the world, while the UK has the highest number of deaths in Europe.

The leaders said the pandemic nevertheless created “unparalleled opportunities to build back better and greener together”.