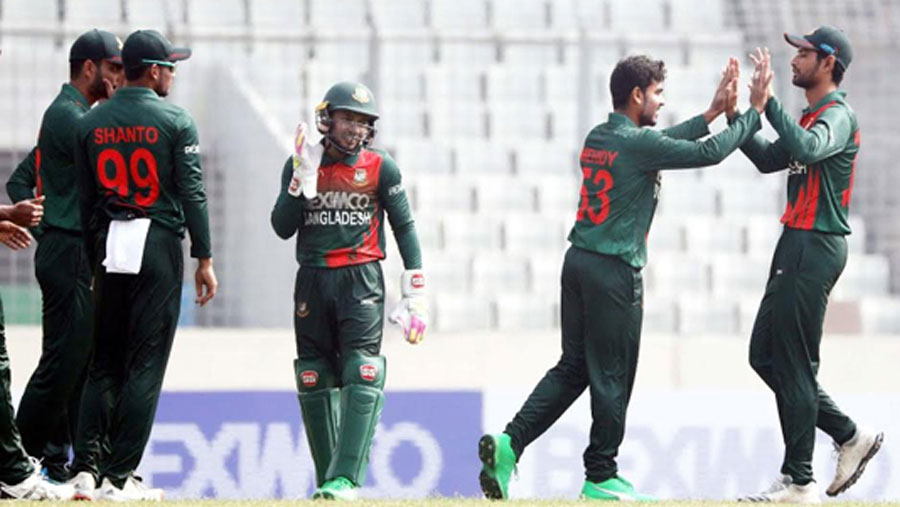 Bangladesh's return to international cricket after over 10 months was a smooth one as Tamim Iqbal started his long-term ODI captaincy with a series win.

The Tigers registered a seven-wicket win in the second ODI against an inexperienced West Indies side at the Sher-e-Bangla National Stadium in Mirpur on Friday (Jan 22), clinching the three-match series 2-0 with a game left to play.

For the first time, Bangladesh bundled out the opposition below 150 for the second consecutive game in ODIs, courtesy of Mehedi Hasan Miraz's four-wicket haul. West Indies were shot out for 148 and the Tigers chased the target with 16.4 overs to spare.

Skipper Tamim scored his 48th ODI fifty while Shakib Al Hasan remained unbeaten on 43 off 50 balls to guide the Tigers to a dominant win.

Shakib continued to make an impact in his second match back from an international ban as the champion all-rounder became the first player to score 2500 runs and pick up 100 wickets at a single venue during his unbeaten 43 knock Friday.

Tamim on the other hand also reached a milestone -- becoming the first Bangladeshi batsman to score 1,000 ODI runs against the West Indies on his way to scoring a fifty.

With two wins, Bangladesh now have 20 points from two games in the ICC 2023 World Cup Super League qualifiers and stand in third position in the table. It was also Bangladesh's seventh consecutive win against the West Indies in the 50-over format.

It was a rather sorry outing for the West Indies after skipper Jason Mohammed won the toss and elected to bat. It was left-arm seamer Mustafizur Rahman once again providing the early breakthrough when he squared up opener Sunil Ambris with a beautiful length delivery, which resulted in a catch at point.

Mehedi then joined the party and dismissed debutant opener Kjorn Ottley for 24 as the visitors kept losing wickets at regular intervals. West Indies were at one point struggling on 67 for six inside 24 overs.

Rovman Powell's 41-run knock helped the visitors go past the 100 mark while Nkrumah Bonner added  21 runs for the West Indies, before the innings folded in 43.4 overs.

Mehedi was the pick of the bowlers as the off-spinner registered his best bowling figures of four for 25 from 9.4 overs.

Shakib was once again instrumental with his left-arm spin, picking up two wickets for 30 runs from 10 overs.